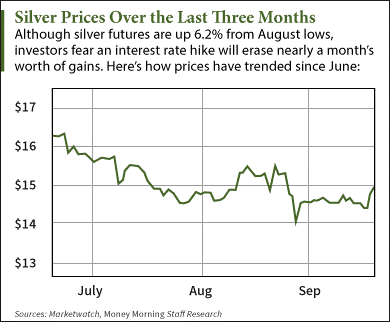 The silver price has been exceptionally volatile recently. Futures cratered to a 52-week low of $14.11 on Aug. 26, two days after most major commodities sunk to their lowest level in 16 years. Since then, silver prices have gained 6.2% and are up 2.7% in September.

The jump in silver prices today shows how few investors expect the U.S. Federal Reserve to raise interest rates. Fed Chairwoman Janet Yellen is slated to announce at 2 p.m. whether the committee will lift interest rates for the first time in nine years.

Since raising interest rates increases the value of the dollar, dollar-denominated commodities like silver would become more expensive. That would consequently reduce demand and send silver prices lower.

According to Money Morning Chief Investment Strategist Keith Fitz-Gerald, now isn't the time for a rate hike. But that doesn't mean the Fed won't go ahead and pull the trigger anyway.

"I think it would be irresponsible of the Fed to raise interest rates now," Fitz-Gerald pointed out, "but that doesn't change the fact that they've ignored data and reality for so long that I think they're going to go ahead and raise rates."

If the Federal Reserve decides to raise rates, investors will see some market volatility. Many traders may decide to take profits and take some money out for the time being.

But don't worry about a major sell-off. Any raise in interest rates will likely be a small one of around 0.25%.

"A rate increase of 0.25% in the Fed funds rate has already been talked about for so long that it's mostly baked into prices now," said Money Morning Capital Wave Strategist Shah Gilani. "This won't be a market buster."

Alex McGuire is an associate editor for Money Morning who writes about commodities. You can follow him on Twitter at @AlexMcGuire92 for all of the biggest commodity price updates.

The History of U.S. Interest Rates: The last time the Fed raised interest rates was nearly 10 years ago in June 2006. But what most investors don't know is that rate hikes used to be a common practice before then. This chart shows the U.S. interest rate history from 1986 to 2015…