What's happening now - before this afternoon's U.S. Federal Reserve interest rate announcement - reminds me of where I was last week and what happened there.

I was in Las Vegas, baby!

Throughout the casinos, you could hear folks saying: "Ladies and gentleman, place your bets!"

And the same thing is happening right now in the stock and bond markets ahead of the Fed decision.

Traders are handicapping what's next for interest rates.

As a result of this, some big - but mostly tentative - bets are being laid down in advance of today's 2 p.m. announcement of the policymaking Federal Open Market Committee (FOMC).

The bet itself is a simple one: Will Fed decision makers raise rates... or won't they?

The wheel is spinning, and all the bets that are being placed - as far as I can see - are on red or black.

However, there's another bet to place... another trade to make.

But no one is making it.

In fact, no one even sees it.

We Interrupt This Disruption... 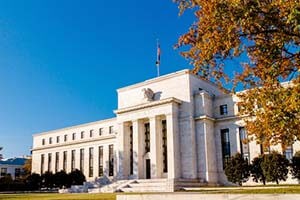 You've heard me talk a lot here about market "Disruptors." In our search for what I refer to as "extreme profit" opportunities, Disruptors are the news events, financial catalysts, market triggers, or other "agent of change" forces that lead to the biggest moneymaking plays you'll find.

And the "zero-interest-rate policies" (ZIRP) the Fed deployed to combat the credit-market collapse of 2008 were one of the biggest market Disruptors in history. ZIRP - coupled with a bond-buying initiative known as "quantitative easing," or QE - ignited one of biggest bear-market rebounds in modern history.

Quantitative easing ended on Oct. 29, 2014. And at the meeting today, Fed policymakers may raise the benchmark short-term interest rate for the first time in nearly a decade.

Call it the "inverse" of one of the greatest market Disruptors in stock-market history.

And that would mean an interest rate hike is a major Disruptor, too.

The stakes are huge all around.

There's a problem here, of course: No one really knows whether a rate hike - or no rate hike - will be good or bad.

The Fed's "wealth effect" is at stake if the central bank boosts rates and the stock market crashes.

It's the wealth effect that makes consumers feel better when rising stock prices show up in the headlines and in their retirement accounts.

It's the wealth effect that makes them feel better about the economy and that motivates them to spend, baby, spend in a cycle that keeps the economy healthy.

The belief in the Fed is also at stake.

It's this belief in the Fed - that the central bank can engineer rising asset prices and can engineer an escalation in gross domestic product (GDP) growth - that allows consumers/investors to spend by day... and sleep at night. A rate increase that short-circuits this consumer confidence and growth will send damaging ripples throughout the financial system.

The smooth and efficient functioning of the interconnected global economy and globally correlated stock and bond markets is also at stake.

A rate increase that causes any or all of this to seize would be devastating.

Let me show you why this would happen...