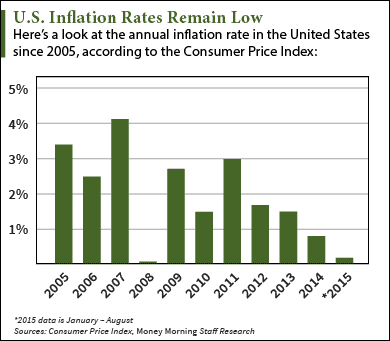 One of the biggest topics from this week's FOMC meeting was U.S. inflation rates, which remain well below the 2% mark the Federal Reserve has been targeting.

Despite low inflation numbers, the Federal Reserve still believes we will see gradual increases from here. Officials expect inflation to grow 0.4% in 2015. While that's still below the target 2%, it does show improvement.

According to Fed officials, a highly valued dollar and low oil prices have helped keep inflation rates suppressed in 2015. Any improvement in the U.S. labor market will help raise inflation rates.

Yellen, in an extremely vague estimate, said she believes inflation rates will hit the 2% target in the "medium turn."

U.S. markets were expectedly volatile following the Fed's interest decision yesterday, with the Dow Jones Industrial Average closing the day down more than 50 points after climbing for most of the day. Today, the Dow was down 166 points in morning trading.