Three days after the second GOP debate, more than a third of Republican voters surveyed agreed that Fiorina had performed the best. The poll, conducted by CNN/ORC, revealed that Fiorina now has 15% support from conservative voters - up 3% from early September. The survey also noted that Trump's popularity has dropped 8%, from 32% earlier in the month down to 24%.

There is a correlation between Fiorina's rise in popularity and the fall of "The Donald's." During last Wednesday's debate, these two politicians butted heads worse than a pair of angry rams...

From the get-go last Wednesday, Carly Fiorina and Donald Trump battled it out, thanks to divisive moderator questions that pitted the two candidates, who share similar backgrounds, against one another. 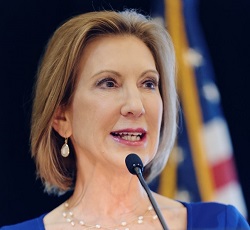 Carly Fiorina at a Republican Party conference in June 2015

Trump reminded viewers that Fiorina's mismanagement of Hewlett-Packard Co. (NYSE: HPQ) ultimately led to the tech company's news last week that it will let go 30,000 employees. In turn, Fiorina made an example of Trump's four business bankruptcies, stating that he'll likely misuse American taxpayers' money in much the same way he did with his failed casino ventures.

According to the latest numbers that have Carly Fiorina polling higher and Trump slightly lower, Americans responded to Fiorina more favorably.

Trump isn't taking the news of Fiorina's rising popularity lying down. On Sept. 20-21, the real estate tycoon continued to blast Fiorina's business record, her electoral prospects, and even how she speaks, reported Business Insider on Sept. 20.

"She did a terrible job at Hewlett-Packard. She did a terrible job at Lucent. I mean, those companies are just a disaster and she destroyed Hewlett-Packard," Trump said in an interview on ABC Sunday. "I mean, she's been terrible." The real estate tycoon went on to cite Fiorina's unsuccessful Senate campaign in 2010 as a prime example of why voters shouldn't - and actually don't - trust her leadership abilities.

Regardless of Trump's renewed focus on highlighting Fiorina's past failures, several media sources have referred to Fiorina's latest debate performance as "mic drop"-worthy. Fiorina was lauded when she challenged Democrats to watch Planned Parenthood's aborted fetus preservation footage. She then suggested that Republicans approve a bill to cut the organization's funding, which is precisely what happened on Sept. 18.