For Sept. 21, here's how the Dow Jones Industrial Average did today, earnings reports, the top stock market news, and stocks to watch based on today's market moves… 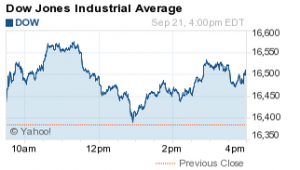 The Dow Jones Industrial Average today (Monday) gained more than 125 points on the back of a surge in oil stocks and investors shrugging off concerns about the U.S. Federal Reserve's decision last week to maintain interest rates at current levels.