According to a report from The Wall Street Journal, Bernie Sanders' plan for the United States could end up costing as much as $18 trillion over a 10-year span. 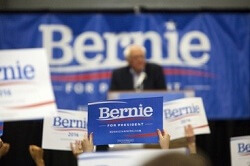 A whopping $15 trillion over 10 years would be spent on implementing a single-payer healthcare system in the United States.

Sanders campaign says that another $1.2 trillion would be spent bolstering social security, while $1 trillion would go to rebuilding America's crumbling infrastructure.

All told, Bernie Sanders' plan calls for an increase in federal spending to a total of $68 trillion over the next decade. According to The Journal, that's an increase of nearly 33%.

Sanders disputed the report shortly after it was released, maintaining that some of the figures were greatly exaggerated. According to University of Massachusetts Professor of Economics Gerald Friedman - whose research was used in The Journal's report - Bernie Sanders' plan for healthcare would actually cost much less than the current Affordable Care Act system. He estimates the current healthcare model would cost as much as $42 trillion over the next decade.

Regardless of the final numbers, it's certain that Bernie Sanders' plan includes a larger government. According to The Journal, the plan represents the largest peacetime government expansion in U.S. history.

In order to fund his plan, Sanders has called for tax increases, including a new payroll tax on employers and employees. However, the employer would no longer have to cover employees' insurance.

The junior U.S. Senator from Vermont defines himself as a "democratic socialist" and has been climbing in the polls for months. According to a new poll by CNN/ORC, Sanders currently has 24% of the Democratic vote, compared to 42% for Hillary Clinton. In August, Sanders had just 17% of the vote.

How do you feel about Bernie Sanders' plan for America? Let us know in the comments...

I am surprised you printed this article, as the original WSJ article was debunked by the person whose material it was based on. The person who actually pulled those figures together showed that Bernie's plan would actually SAVE Americans $5 Trillion over 10 years:

This could be funded with a tax on hot money financial transactions on Wall Street. This would generate the funds necessary to pay for all of this without the tax increases that wouldn't even be enough to pay for it.

“Pope Francis is not just asking us to alleviate poverty and move toward more a equitable distribution of wealth and income. Nor is he simply requesting that we act boldly to combat climate change and save the planet. He is asking us to create a new form of society where the economy works for all, and not just the wealthy and the powerful. He is asking us to become a different kind of person, where our happiness and well-being comes from serving others and being part of the human community – not by spending our lives accumulating more and more wealth and power while oppressing others.”

Never mind that the US is broke, and the Fed is insolvent. Just push a few buttons and transfer those fake numbers…..with a $ sign in front and voila, more money.
I'm getting the feeling I should learn to speak French, since that's the way we have been going…