For Sept. 22, here's how the Dow Jones Industrial Average did today, earnings reports, top stock market news, and stocks to watch based on today's market moves… 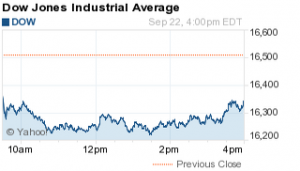 The Dow Jones Industrial Average today (Tuesday) fell 179 points thanks to a sell-off in commodities and energy stocks over concerns about global economic growth. The markets largely reacted to new worries about the Chinese economy after the Asian Development Bank slashed its forecast for China's annual economic growth to 6.8%, down from its previous expectations of 7.2%. Falling expectations are weighing on markets around the globe and could have steep consequences for Japan and Australia.