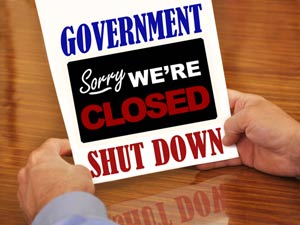 The 16-day shutdown also sidetracked the creation of an estimated 120,000 new jobs, according to an October 2013 report from the Council of Economic Advisers. It triggered government furloughs that ultimately amounted to 6.6 million days' worth of federal employment spread over several agencies. Furloughed workers were paid retroactively ($2.5 billion total, according to a November 2013 report from the Office of Management and Budget).

Of course that means the taxpayers were the big losers – they lost out on worker productivity, and the government didn't actually save any money by suspending paychecks.

Now, exactly two years later, we're about to do it all over again.

The first day of fiscal year 2016 is on Oct. 1. That's the deadline for funding.

But debate over financing nonprofit reproductive healthcare provider Planned Parenthood threatens to halt the nation if no measure is passed to keep the government funded beyond Sept. 30. [Editor's Note: Get a breakdown of the Planned Parenthood controversy here…]

And in fact, House Republicans approved a standalone measure to defund PP for one year on Sept. 18 – the first step toward a government shutdown this month.

"We stand yet again on the verge of another government shutdown," Fitz-Gerald said. "This time the bickering centers on funding related to Planned Parenthood, which has been linked to the appalling sales of fetal body parts in recent months, while other legislators insist on a planned multibillion dollar tax hike for private equity managers."

"The way I see it, wingnuts on both sides of the aisle are playing chicken with an $18 trillion economy and world markets once again."

Aside from the sweeping $24 billion loss incurred by taxpayers, we can estimate government shutdown costs like-in-kind to these from 2013…

"Not surprisingly in the last government shutdown, mainstream investors were spooked by headlines highlighting the unfolding doom associated with Washington's incompetence," Fitz-Gerald said. "Nowhere was that more clearly defined than in defense stocks, with some of the bigger players losing up to 7% of their market capitalization in just three days."

But the full cost of the government shutdown was much greater…

It caused irreparable damage at a number of government agencies and again called into question America's ability to control its finances.

Basically, the United States lost some of its swagger thanks to D.C. drama.

The government was closed because our country's leaders couldn't fulfill one of their most central responsibilities: enacting a budget.

Washington lawmakers chose politics over people as they wrangled over a deal.

And they're about to do it again.

"Financial buffoonery has been a part of government since the dawn of time, and another shutdown is par for the course," Fitz-Gerald said.

Fitz-Gerald gave Total Wealth readers three investment opportunities that will arise from "Government Shutdown 2015." "The last government shutdown, as costly and embarrassing as it was, created some quick double-digit profit opportunities for savvy investors," he noted. You can access those picks here, for free.

"This time around, you'll be prepared even if the government isn't."

Shut it down! Obama is fundamentally transforming our government while Republicans sit on their hands for fearimg of shutting down the government. Do we really want a unitary government with one branch–a despotic President? Obama has arrogantly spit in the face of most Americans because he believes they will challenge his 8nconstitutional actions. That's what happens when you elect a Marxist to the highest office in the land with a mission of bringing America and its system of government to its knees.