Sigh... we stand yet again on the verge of another government shutdown. This time the bickering centers on funding related to Planned Parenthood, which has been linked to the appalling sales of fetal body parts in recent months, while other legislators insist on a planned multibillion dollar tax hike for private equity managers.

What could possibly go wrong - other than everything?!

The way I see it, wingnuts on both sides of the aisle are playing chicken with an $18 trillion economy and world markets once again.

Still, the investor in me is excited by the prospect.

The last government shutdown, as costly and embarrassing as it was, created some quick double-digit profit opportunities for savvy investors.

This one will, too.

But only if you're prepared ahead of time using one of our favorite Total Wealth Tactics - the lowball order - and only if you're looking at the best companies in this sector.

The October 2013 government shutdown came with a $24 billion price tag, according to Standard & Poor's, as hundreds of thousands of furloughed workers took home smaller paychecks and small businesses were hobbled by frozen government contracts and payments. Consumer confidence went into the proverbial toilet, and quarterly GDP growth fell from 3% to a middling 2.4%.

Not surprisingly, mainstream investors were spooked by headlines highlighting the unfolding doom associated with Washington's incompetence. Nowhere was that more clearly defined than in defense stocks, with some of the bigger players losing up to 7% of their market capitalization in just three days.

As usual, though, the herd failed to grasp something we talk about all the time.

Companies tapped into Unstoppable Trends making "must have" products tend to have the strongest fundamentals, the best balance sheets, and, more importantly, plenty of staying power. Any short-term price drop is, therefore, a fabulous buying opportunity under the circumstances. 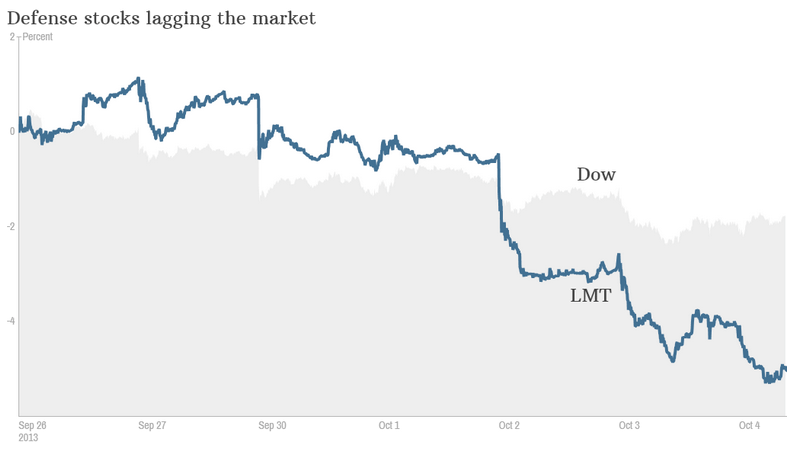 Raytheon Co. (NYSE: RTN) and Lockheed Martin were in the same boat. Both fell approximately 6% on the news of the shutdown, shedding tens of billions of dollars in market capitalization as they tumbled. Northrop Grumman Corp. (NYSE: NOC), United Technologies Corp. (NYSE: UTX), and General Dynamics (NYSE: GD) are just a few of the others that lost more than the broader markets back then.

But here's the thing - each of those companies came roaring back, and investors who swooped in to buy them at a steep discount as recommended have had the opportunity to more than triple the S&P 500 since our government reopened on Oct. 17, 2013.

Now, obviously there are no guarantees. You cannot simply buy any stock that's cheap or in a decline - most are simply junk at a lower price.

But companies like the ones we're talking about are high-quality players tapped into the biggest of all of our Unstoppable Trends - War, Terrorism, and Ugliness. That means they've got trillions of dollars driving them and gobs of upside potential ahead. Short-term market movements are nothing more than noise for them.

The best way to play this situation is to use one of our favorite Total Wealth Tactics...

It's clear that a put strategy might also be effective in this situation, and even yeild a faster and provide much higher percentage gains. I'm sure puts on these defense companies are already rising. Do you have any suggestions for the best way to bracket a put-based strategy?

But on the other hand, the Lowball stock purchase strategy protects against the risk of losses here (as compared to a put or short-sell strategy) in the unlikely event that the political wingnuts settle their squabbles and there is no shutdown Oct 1 after all. In this case the lowball stock purchases would not happen and you'd only pay for the costs of your placing your orders.