For Sept. 23, here's how the Dow Jones Industrial Average did today, earnings reports, top stock market news, and stocks to watch based on today's market moves… 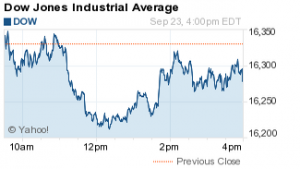 The Dow Jones Industrial Average today (Wednesday) slipped 50 points after new economic data suggested the global economy was slowing down. According to the September PMI report, U.S. manufacturing growth remained at its lowest levels since August 2013. Meanwhile, Chinese manufacturing growth fell to a six-and-a-half-year low over the last month. News of the manufacturing decline in China hit emerging markets and nations linked to the world's second-largest economy the hardest during today's trading session. The Brazilian real fell more than 2% today against the U.S. dollar and hit its lowest exchange level ever.