While the Fed doesn't want to connect the dots for you, I will be happy to do so.

This slow growth is the inevitable result of too much debt, too much regulation, too many new entitlements like Obamacare, and a total absence of meaningful fiscal policy such as tax reform. We are governed by a confederacy of dunces at the Fed and in Congress and the White House, and they are leading us straight into the jaws of another financial crisis - or Super Crash.

This means that growth will be slow for years to come, and interest rates will remain suppressed. In fact, that is Super Crash Inevitability No. 2: The global economy is stuck with subpar growth.

When it comes to the assets and investments you may hold, this has an especially nasty effect on  bond yields.

It will continue to render traditional bond investments unattractive because they will continue to offer extremely low yield. All you have to do is look at the returns being generated by even the most highly respected bond managers in the world and the largest bond funds in the world to realize that you will go hungry depending on bonds for income and total returns.

When Will Bond Yields Go Back Up?

Bonds had already been turned into "certificates of confiscation" by the U.S. Federal Reserve before it once again refused to raise interest rates by a miniscule 25 basis points last week.

The question that now must be asked is whether the confiscation of capital from savers will be permanent.

As I showed you last week, there is now little prospect of any meaningful rate increases before 2017. The reason given by Fed Chairwoman Janet Yellen for postponing once again a measly 25-basis-point rate hike - which would have been the first in nine years - was that she was concerned about economic weakness in China and other emerging markets.

And well she should be. 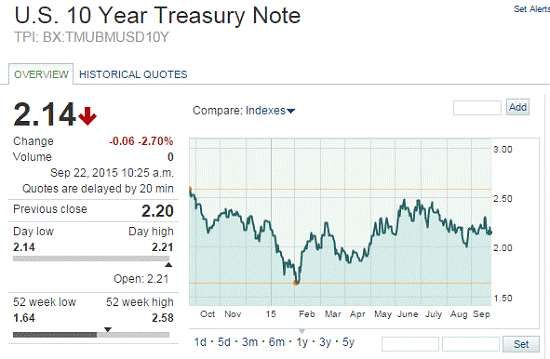 China's economy is a house of cards built on a foundation of $28 trillion of debt (as of mid-2014 - it is undoubtedly higher now) that can never be repaid. China's growth is slowing significantly, and whatever growth remains is being driven by government stimulus and debt. China's efforts to generate domestic growth will take time. In the meantime, it has built up an unsustainable mountain of debt.

And the rest of the emerging markets are also suffering from big problems. Brazil is experiencing a major political scandal involving deep corruption at Petroleo Brasileiro SA (NYSE: PBR), which is partly owned by the government. Brazilian President Dilma Rousseff is facing growing talk of impeachment. Russia's economy is in a deep recession as a result of the collapse in oil prices.

Emerging markets borrowed trillions of dollar-denominated debt that became much harder to repay as the dollar appreciated sharply beginning in 2014. The strong dollar was likely another factor that led the Fed to back off from raising rates last week. But doing so only treated the symptoms of the underlying disease - high debt levels and low levels of organic economic growth throughout the world.