As we've previously discussed in Oil & Energy Investor, major infrastructure for solar and wind power networks is complete, while the cost of generating power from either has reached grid parity with traditional sources of electricity.

And now there is a new centerpiece for the accelerating move to renewable energy...

The state has opted to go all out on alternative energy. In May, its legislature overwhelmingly passed a plan to move to complete independence from fossil fuels for power generation. Governor David Ige has put a goal on all of this: 100% by 2045. 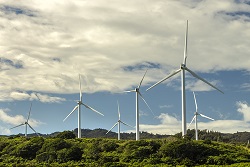 Already, as the governor remarked in late August, "The state is creating a number of research institutions and working with a consortium of private companies in what it calls an 'Energy Excelerator,' which has generated $400 million in investment."

But Hawaii has an unusual partner in moving away from its reliance on oil and natural gas:

What's happening in Hawaii may allow us to make some nice money from a state deciding to go green... and from the military's need to go off the grid...

You see, because of rising security concerns, the Navy, Army, and Air Force are dead set on generating one gigawatt each of their own energy from sources not based on the traditional grid.

The Navy wants to accomplish this in the next 18 months.

When the power goes out, whether because of an intentional attack or severe weather, military bases need to keep running. Relying on power from the traditional grid undermines their mission.

That's where Hawaii comes in...

Most of the state's existing power plants are in vulnerable areas, if not from enemy attack, then certainly from uncontrollable weather events.

Dr. Moors: Do you have documentation to show your conclusion that "major infrastructure for solar and wind power networks is complete, while the cost of generating power from either has reached grid parity with traditional sources of electricity."

Are you discounting state and federal subsidies of about 55% coming from taxpayers for "renewable wind and solar" to arrive at this conclusion?

With cheaper gas and oil now, that conclusion seems improbable, if not impossible.

The part for most states left out is the huge cost to tax payers and cost of the electricity increase to pay for these expensive projects. Also the cost to wildlife as windmills kill hundred of thousand of birds, plus the huge upkeep needed to keep them running. If we weren't getting fleeced to pay for these projects there would be hardly any. I remember when solar was used to heat water and the cost for a solar tank and panels came to $800 total. Then the government got involved with tax credits and this same system now cost $3000 so as you can see anytime the government gets involved you get the same results at a much higher cost.