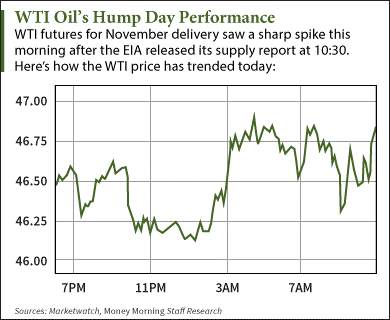 The agency reported a decline of 1.9 million barrels in oil supplies last week. That's a bigger drop than the Platts forecast of 700,000 barrels.

Meanwhile, Brent crude oil prices gained 1.7% to trade at $50.70 a barrel. The international benchmark is still down 9.1% this month.

Oil has been exceptionally volatile over the last three months. WTI crude oil prices cratered to a six-year low of $38.76 on Aug. 24. They've now fallen 24.4% since June 23.

But the good news is this yearlong price crash is near a bottom. And according to Money Morning Global Energy Strategist Dr. Kent Moors, low crude oil prices will provide investors with several profit opportunities as we approach the end of the year…

Why WTI Crude Oil Prices Will Boost Oil Stocks in 2015

The biggest factor for investors to watch is the mergers and acquisitions market. The low oil price environment is ushering in a wave of M&A deals that will strengthen the market and push prices higher.

In fact, we've already seen it with the Shell-BG Group and Schlumberger-Cameron deals…

On April 8, Royal Dutch Shell Plc. (NYSE ADR: RDS.A) acquired BG Group Plc. (OTCMKTS ADR: BRGYY) for $70 billion. It's the largest energy merger in more than 10 years and will create the largest producer of liquefied natural gas in the world.

"The Shell-BG [transaction] is the first clear megamerger option crossing the oil-gas division," Moors said in April. "We will see more of these as the new energy balance among a widening number of energy sources kicks in."

According to Moors, targeting M&A is just one of three ways to find the best oil stocks to buy.

Alex McGuire is an associate editor for Money Morning who writes about energy. Follow him on Twitter at @AlexMcGuire92 for all the biggest oil prices forecasts.