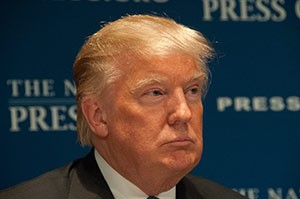 Donald Trump speaks at the National Press Club in Washington, D.C. on May 27, 2014

Donald Trump polls 25% in a new Quinnipiac University dataset that came out Sept. 24. That's slightly down from the institute's Aug. 27 poll that had Trump at 28%, but still puts him well in front of the GOP's 2016 presidential field. Trump also landed in the top spot with 26% of Republican primary voters in a New Hampshire-specific CNN/WMUR primary poll out the same day. New Hampshire is one of the two most important primary states - it, along with Iowa, sets the pace of every presidential election.

But another feud broke out on Wednesday between Trump and FOX News - and this time, the differences may be irreconcilable.

First, you'll need some history to frame the latest development...

On Aug. 11, we told readers about a developing riff between the billionaire and the news network. Despite the fact that Donald Trump polled at least 10% higher than any other Republican candidate after the first GOP debate aired on FOX News on Aug. 6, the network's reporting on Trump took a noticeable, negative turn.

Compare with these post-debate headlines from the network:

A verbal spat between Trump and popular network anchor and debate moderator Megyn Kelly occurred during and after the debate. That's been highly touted as the reason FOX News changed its tune - but we're not buying it.

You see, in the opening 30 seconds of the first GOP debate, the real-estate billionaire refused to pledge to support the Republican nominee and not run as a third-party candidate. Moderator Bret Baier asked that candidates who refused to take the pledge raise their hand. Trump's immediately went up in the air.

And it can pit FOX News - the voice box of the RNC - against the Donald Trump campaign.

Which brings us to the latest in the Donald Trump-FOX News feud...

On Wednesday, Donald Trump tweeted out a message saying he intends to boycott FOX News:

Trump had been scheduled to appear on "O'Reilly Factor" Thursday night.

The network snapped back with an official statement saying Trump wasn't boycotting - he'd been cancelled:

At 11:45am today, we canceled Donald Trump's scheduled appearance on The O'Reilly Factor on Thursday, which resulted in Mr. Trump's subsequent tweet about his 'boycott' of FOX News. The press predictably jumped to cover his tweet, creating yet another distraction from any real issues that Mr. Trump might be questioned about. When coverage doesn't go his way, he engages in personal attacks on our anchors and hosts, which has grown stale and tiresome. He doesn't seem to grasp that candidates telling journalists what to ask is not how the media works in this country.

Then Trump's campaign responded with an official statement to the press of its own:

Mr. Trump stands by his statement made earlier today. As a candidate for President of the United States and the definitive front runner in every poll, both nationally and state wide, including the just released poll in the state of Florida, Mr. Trump expects to be treated fairly. All you have to do is look at the tremendous ratings last night from the Late Show with Stephen Colbert, where Mr. Trump was the guest, or the ratings from both debates, to fully understand the facts.

The last riff between Trump and FOX News eventually faded. He appeared on "O'Reilly Factor," "Hannity," "On the Record with Greta Van Susteren," among others, in late August through most of September.

But this week's exchange felt more personal, with official statements from the network and Trump's staunch vow to boycott.

Despite the falling out, Donald Trump polls continue to shine.

Of all the pics, President Donald J. Trump is #1! My hubby and I enjoy him and his 'energy!' We would like less attack on republicans and more on the current administration and its' following..namely Hillary and Commie Bernie Sanders! We need to focus now. Not get 'off track!' We are totally 'on track' with President Donald J. Trump, we just need to hear some real meat now! Thank you for standing up for America!!!!!!!!!