The U.S. Federal Reserve did gold stocks a big favor on Sept. 17 in not raising interest rates.

This sector has been mired in a correction since late 2011, but signs increasingly suggest that's coming to an end.

The action in recent months has been encouraging, leading savvy investors to examine, or re-examine, gold stocks as one of the few values the market still has to offer.

In my recent article, "Gold Price Forecast Sees Rise Before 2016 - Check Out the Charts," I detailed where gold has been in the last 12 months, as well price movement leading up to the Fed's rate announcement.

Gold prices gained 2% in the days preceding the Fed's decision and another 1% through the remainder of that trading day.

For their part, gold stocks also anticipated the Fed decision, gaining a whopping 6% as a group in just the four days before, and another 4% that same day, for a total of 10%.

Now let's look how gold and gold stocks moved this past week since the Fed meeting.

As the chart below shows, gold moved up strongly in the days before and the day after the Fed news, peaking at $1,140. Then it consolidated and retraced to $1,123 before shooting up to $1,154 by Sept. 24, just one week later. 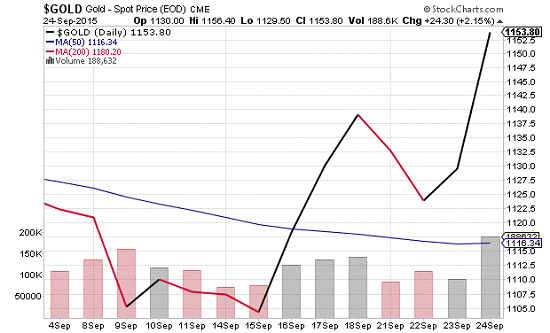 Looking at gold stocks, here's what they did in the week before and the week since Fed Chairwoman Janet Yellen spoke. 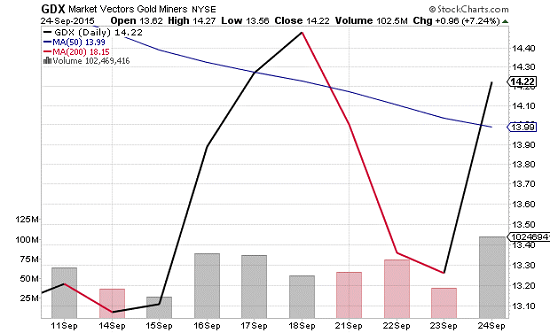 The Market Vectors Gold Miners ETF (NYSE Arca: GDX), which is a good proxy for major gold miners and royalty companies, also backed off over the next few days. But on Sept. 23, GDX put in a higher low than it had previously set on Sept. 14. GDX then shot up 7.24% the next day, Sept. 24, slicing through the 50-day moving average with ease and on big volume for the second time in a single week.

Now if we back up and view the GDX chart over the last four months, two notable points emerge.

What a waste of time. Articles four months old state gold Is surging.
Since December 2009, the price of both silver and gold are the same. 50K invested in gold in Dec 2009 would be worth the same today less fees and charges to convert to usable USD.

There may be a future for gold, but where is it?

Where are gold futures going in 2016?

When will the future of gold start growing in 2016

You are releasing articles written since September – October 2015. It is not serious.

It's called an archive.