America's obsession with celebrities, wealth, success, popularity, and social media all come together in the Donald Trump candidacy in the 2016 Presidential election.

Pundits from every part of the political spectrum remain flummoxed by his success. But they've been looking at Trump as though he were an ordinary political candidate. It's actually not all that shocking that the reality TV show host and tabloid favorite raced to top of the Republican field in late July and stayed there.

To be fair, no other politician would last long were they to behave like Trump. The bombastic pronouncements, rude insults, and outrageous positions would result in a quick exit.

But not only has this behavior not hurt Trump, it's part of his winning formula. 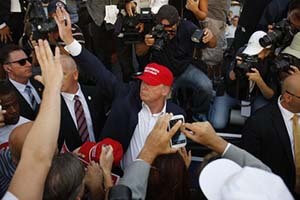 Voters have been drawn to Donald Trump not just because he talks about middle class concerns, but because of how he talks about them. He says things other politicians would never dare say.

That makes Trump a sensation - ideal for cable news channels hungry for ratings and sharing on social media.

In many ways, Trump really is in the right place at the right time to make his run for the White House.

One unusual aspect of the 2016 presidential election race is that it has very much been about "outsiders" - people with little or no elected experience, or who otherwise reject the political establishment.

Trump rose to the top quickly because of his near-universal name recognition - the result of being in the public eye since the early 1980s.

Yet even that doesn't fully explain Trump's high levels of support. Here's why the Trump campaign has had so much success...

Trump can do much better that 'what' we have now! He has a business mind not
bothered with links to other politicians and lobbyists or making deals for his own pockets.
Trump will shake up the establishment which has become entrenched in our government
for years and look where it got us ! I'm willing to give him a shot at making America
Great Again!

Americas politicans have been bought and paid for for years and both the deficit and the huge gap between the rich & the rest of the citizens clearly shows that.

Perhaps – just perhaps – Trump is real and not just out for his own gain / ego ( not likely.) and if so he just might turn America around and bring it back to an actual democracy.

Or – would you rather have yet another Bush or Clinton.? Lord their record speaks for itself.

And, I am sad to say, Obama has just turned out to be a lame duck.

Hard to say God save America when America largely has turned its back on God – but with Trump – at least there will be change.

Trump as president would be for Trump. If its good for Trump, it's good for America. A lot of talk and probably no backing from the Senate. To be perfectly honest, as a Republican, I can safely say that not a single candidate running for office is qualified for the Presidency. None with foreign service, religious issues cloud the need for economic, social, immigration and solid governmental objectives.

The real question is: Would Trump be a better president than Clinton. Now that we know Clinton is the most corrupt politician in history and is in bed with the corrupt insiders and Wall Street and would continue her pay-to-play scheme we know anyone would be better than her. So the answer is yes to Trump and almost anyone else.