As the Volkswagen scandal continues to unfold, it's clear one of the few winners from this ordeal will be the Tesla Motors Inc. (Nasdaq: TSLA) stock price.

The TSLA stock price has been mostly flat since the news broke, but it is up more than 19% in the last month.

Meanwhile, Volkswagen AG (OTCMKTS ADR: VLAKY) has lost a quarter of its stock price this week alone. Shares tumbled after the Environmental Protection Agency accused VW of cheating on the emissions tests of their so-called "clean diesel" engines. The EPA alleges the VW software had a "defeat device" that let the engine know when it was being tested for emissions. When engaged, the computer spit out emissions information that underplayed the amount of pollutants the car was giving off.

According to regulators, Volkswagen diesel cars are spewing nitrogen oxide at up to 40 times the acceptable level. Nitrogen oxide contributes to pollution. It can also aggravate respiratory conditions such as asthma, bronchitis, and lung disorders. 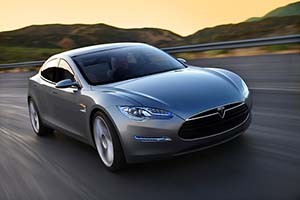 Now, VW is prohibited from selling any 2015 "clean diesels" already on the lot in the United States. It most likely won't be allowed to sell any 2016 vehicles either. Used VW sales are also impacted, and the company is facing massive recalls.

Asian and European officials are also looking into the matter. Some 11 million VW cars worldwide are said to be affected by the diesel scandal.

Many buyers of these and other diesel cars buy these vehicles for their gas mileage, power, and resale value. But now they feel cheated, and many will never buy another diesel vehicle.

Now, many of the consumers who want similar features of a diesel car are expected to switch to electric cars.

Battery life and the motor technology that powers electric cars continue to improve and get cheaper. That has attracted car buyers.

"From a cost perspective, diesel doesn't seem like the way to go, especially as batteries get cheaper," Dr. Daniel Sperling, told Wired.

And while this week's news is absolutely devastating for Volkswagen, it's great news for the TSLA stock price. Tesla is already the world's leading electric-vehicle maker, and now has a huge opportunity as more consumers switch to electric...

your suggestion that Tesla could benefit is a dangerous idea as it would push some
investors to buy a stock that is overvalued in a big way more so in the kind of
market environment we are in. 99 pc of VW buyers are not in a position to buy
an expensive Tesla car….why didn t you say to go to BMW ?