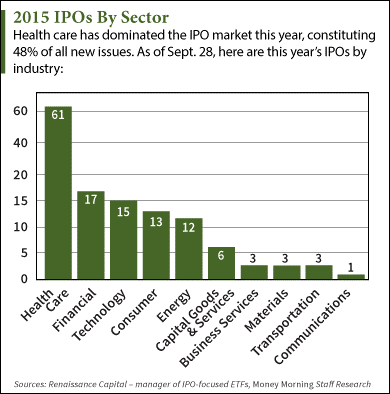 There are 11 new IPOs this week expected to hit the market. According to Renaissance Capital, a manager of IPO-focused ETFs, the 11 deals could raise a combined $1.4 billion.

The 2015 IPO market has been abnormally slow compared to last year. In fact, there are more IPOs this week than in all of August.

Surgery Partners Inc. (Nasdaq: SGRY) is a medical company that owns or operates 99 surgical facilities across 28 states. The Tennessee-based firm booked $713 million in sales between June 2014 and June 2015. The Surgery Partners IPO is the largest deal this week. It hopes to raise $350 million by offering 14.3 million shares at a price range of $23 to $26. The firm commands a market valuation of $1.2 billion and will debut on Thursday, Oct. 1.

Money Morning Members: Keep reading for nine more new IPOs this week. For those new to Money Morning, sign up to keep reading – it's completely free…