For Sept. 28, 2015, here's how the Dow Jones Industrial Average did today, earnings reports, top stock market news, and stocks to watch based on today's market moves… 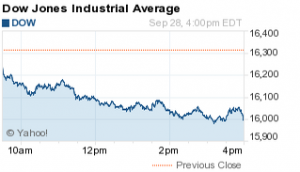 The Dow Jones Industrial Average today (Monday) fell 312 points as concerns about China's economic growth weighed on investor sentiment. Healthcare stocks slumped another 3.6% on the day as a sell-off in biotech stocks continued. Meanwhile, the S&P 500 slipped below the psychological barrier of 1,900 for the first time since Aug. 26.