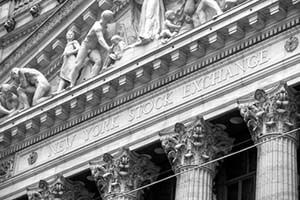 Futures for the Dow Jones Industrial Average today (Monday, Sept. 28, 2015) were down 93 points as traders take a cautious approach ahead of three speeches by members of the U.S. Federal Reserve, a slew of economic data, and a looming budget debate in Washington, D.C. Investors are focused this week on two major data announcements: the monthly updates of manufacturing data from China and the U.S. unemployment rate.

On Friday, the Dow Jones Industrial Average gained 113 points on optimism from the Federal Reserve and an improved second-quarter GDP reading. Meanwhile, the S&P 500 and the Nasdaq fell after a massive sell-off in biotech stocks pushed the sector into bear territory. The biotech sector finished last week down more than 13%.

Last night, Fed Chairwoman Janet Yellen said there will likely be a fed fund rate increase "later this year, followed by a gradual pace of tightening thereafter." After the third and final revision by the U.S. Commerce Department, second-quarter GDP was up 3.9%, well ahead of consensus expectations of 3.7%.