The 70th annual session of the United Nations General Assembly kicked off today in New York City. The gathering pitted Putin vs. Obama in their first face-to-face meeting in nearly a year. 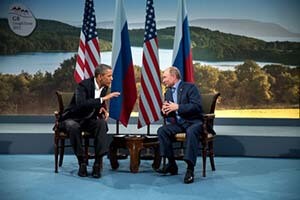 But before U.S. President Barack Obama was scheduled for a sit-down with the Russian president later in the day, he set a tense tone in a 43-minute early-morning UN address:

"Consider Russia's annexation of Crimea and further aggression in eastern Ukraine. America has few economic interests in Ukraine," Obama said pointedly. "But we cannot stand by when the sovereignty and territorial integrity of a nation is flagrantly violated. And [if] that happens without consequence in Ukraine, it could happen to any nation gathered here today."

Obama went on to say Russia has more than earned its current economic struggles due, in part, to its manhandling of Crimea.

"Look at the results. The Ukrainian people are more interested than ever in aligning with Europe instead of Russia. Sanctions have led to capital flight, a contracting economy, a fallen ruble, and the immigration of more educated Russians."

Indeed, the decimation of the ruble and record-low oil prices have crippled Russian wealth.

Ranked as the sixth-largest economy last year, the International Monetary Fund (IMF) estimated it could drop down to the 19th-largest in 2015. (The United States is the world's largest economy.)

As a result, the value of imports to Russia has dropped by 39% from January through August. Exports have fallen 30%.

Here are some additional cold, hard facts about the present state of Russia's economy:

"The facts on the ground in Russia are, at best, chaotic," Money Morning Resource Specialist Peter Krauth told readers on Dec. 22. "Oil prices are way down, and its currency, the ruble, has crashed."

Despite President Obama's stated "desire not to return to the Cold War," the two leaders made clear today that's exactly where we're headed…

In his address, Obama firmly stated fidelity to international rules that require the United States to respond decisively to Russia's infractions in Crimea and Ukraine. He called out Putin on his support of "tyrants like Bashar al-Assad, who drops barrel bombs to massacre innocent children."

"That's the basis of the sanctions that the United States and our partners imposed on Russia. It's not a desire to return to the Cold War," he said.

But Vladimir Putin, in remarks not long after President Obama's, did not appear to back down.

He complimented Assad's forces, stating they are "valiantly fighting terrorism face to face," and were, along with the Kurds, the only ones "truly fighting" ISIS.

Putin appeared to pointedly criticize the United States when he said those at the "top of the pyramid" violated UN code after the end of the Cold War. "The export of revolutions – this time so-called democratic ones – continues," he said.

"Don't underestimate Vladimir Putin: he knows how to fight back," Krauth said. "And right now, that trait might be all that keeps Russia from a catastrophic collapse."

I have my own version of history based on what I had read and listened to the media and literature made available . I realize that if my version is true, nobody would want to know about it.. All I can do is to keep quiet and keep observing . I realize that any average person with all normal distractions would puzzle at my own version as nonsense. it can be true. I would gladly share with someone who will listen before the cameras.