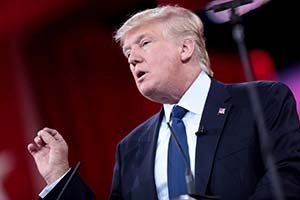 Republican presidential front-runner Donald Trump unveiled a tax plan on Monday under which a large segment of U.S. taxpayers would have a "zero tax" rate.

At an 11 a.m. news conference on Monday at Trump Tower in New York, Donald Trump unveiled his tax policy, which he said would "make America strong and great again."

"It will provide major tax relief for middle income and for most other Americans," Trump said Monday. "There will be a major tax reduction. It'll simplify the tax code, it'll grow the American economy at a level that it hasn't seen for decades."

Still, the billionaire businessman said he would increase rates for some individuals, such as hedge fund managers, who he says don't pay enough. Trump would do this by eliminating the so-called "carried interest loophole" that allows hedge fund managers and private equity firms to pay a lower rate than most individuals.

"I think it's going to be a plan that's going to make people happy, other than maybe the hedge fund guys who make hundreds of millions of dollars and pay very little tax," Trump said during a recent town hall event in Columbia, S.C., adding: "I think they're all going to be my enemies."

Check back with Money Morning as we continue to cover Donald Trump's zero tax policy.