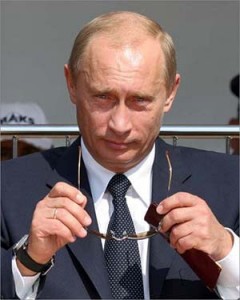 Russian President Vladimir Putin has held office for 12 years and counting - longer than any other Soviet elected to the position.

The extensive reign, combined with his enigmatic personality, means plenty of memorable Putin quotes have racked up over the years...

In fact, Russia's 15-time "Man of the Year" (and TIME's 2007 "Person of the Year" in the United States) just added a few new soundbites Monday at the 70th annual session of the United Nations General Assembly in New York City.

The KGB vet kicked off his address with a blatant dig on the United States. He said the original purpose of the UN has been violated by "those that found themselves at the top of the pyramid" after the Cold War. "They thought they knew better and thought they did not have to reckon with the UN to legitimize their decisions. Of course, the world is changing. The UN must be consistent with this natural transformation. Russia stands ready."

Here are 15 of the most striking Putin quotes - you'll find the strained relationship between Putin, Obama, and their two respective nations surface in more than a few of these...

15 of the Most Memorable Vladimir Putin Quotes

Putin Quote No. 1: "Primarily the United States has overstepped its national borders, and in every area." At the 43rd Munich Conference on Security Policy on Feb. 12, 2007.

Putin Quote No. 2: "We will chase terrorists everywhere. If in an airport, then in the airport. So if we find them in the toilet, excuse me, we'll rub them out in the outhouse. And that's it, case closed." Said as Boris Yeltsin's prime minister in 1999, when a Russian journalist asked him about the air war he'd recently waged against separatist-held Chechnya, according to The Telegraph.

Putin Quote No. 3: "It is extremely dangerous to encourage people to see themselves as exceptional, whatever the motivation." An op-ed Putin wrote for The New York Times on Sept. 11, 2013.