For Sept. 30, 2015, here's how the Dow Jones Industrial Average did today, earnings reports, top stock market news, and stocks to watch based on today's market moves… 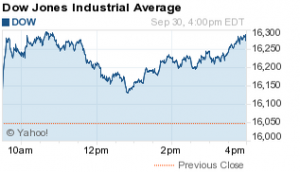 The Dow Jones Industrial Average today (Wednesday) ended the worst quarter for international markets in four years on a high note. The Dow added 235 points to close out a quarter in which major equity indexes around the globe slipped more than 10%. Concerns about declining growth in China, falling oil prices, the U.S. Federal Reserve's confusing interest rate rhetoric, and economic slumps in major export markets fueled the quarterly downturn. All three major U.S. indices finished their worst quarter since 2011. The Dow was the worst performing, declining roughly 7.5%.

Thursday's gains were fueled on the back of a strong employment report issued by Automated Data Processing (ADP). The firm said the private sector added 200,000 jobs in September.