For Oct. 1, 2015, here's how the Dow Jones Industrial Average did today, earnings reports, top stock market news, and stocks to watch based on today's market moves… 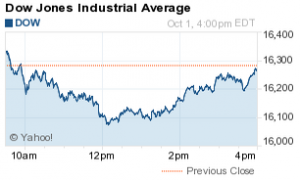 The Dow Jones Industrial Average today (Thursday) kicked off the fourth quarter with a 12-point slide as investors prepared for tomorrow's report on non-farm payrolls. Meanwhile, the S&P 500 and the Nasdaq were both up marginally to finish the session. A busy day of mixed economic data featured a decline in U.S. manufacturing activity and a strong jobless claims figure.

Meanwhile, the slowdown in China continued to spook investors. This morning, China reported its Caixin Manufacturing PMI, a gauge of nationwide manufacturing activity, fell to a six-and-a-half year low of 47.2 in September. That compares with a reading of 47.3 in August.

18570 Reads
These 3 High-Yield REITs Pay 8%, 10%, and 12% Dividends
REITs produce gobs of cash from rent and other fees generated from properties including office buildings, storage units, multifamily units, and more.