We haven't yet seen the Donald Trump trade plan in written form, as we have with his tax plan, but the front-runner for the Republican presidential nomination has said a lot about what he wants to do.

Unlike the tax proposal, which appears workable if not perfect, the Trump trade plan would be an economic disaster for both the United States and the world. 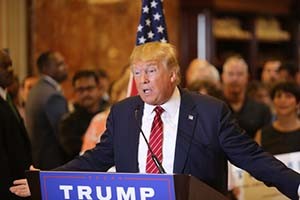 Over the course of dozens of speeches and interviews, Trump has indicated he would use tariffs to punish U.S. companies that have moved jobs overseas, as well as foreign countries that, in his view, aren't playing fair.

The Trump trade plan for Mexico is a case in point.

"Mexico is killing us on trade," Trump says, claiming that Mexican trade negotiators have outwitted their U.S. counterparts.

But Mexico is America's third-biggest trading partner, with $534.5 billion worth of goods moving between the two nations in 2014. The U.S Chamber of Commerce estimates 14 million U.S. jobs depend on trade with Mexico.

Plus, because of an unusual "production sharing" agreement, 40% of the content of goods imported from Mexico to the United States are made in America. So $0.40 out of every dollar used to buy Mexican imports actually supports U.S. industry.

This inconvenient fact plays a part in Trump's wrong-headed attacks on Ford Motor Co.'s (NYSE: F) plan to spend $2.5 billion on an engine and transmission plant in Mexico.

Trump's answer is a punitive tariff.

"Every car and every truck and every part manufactured in this plant that comes across the border, we're going to charge you a 35% tax, and that tax is going to be paid simultaneously with the transaction, and that's it," Trump said when he announced his candidacy in June.

That populist position appeals to many Trump supporters. But here's why it's a bad idea...

What you are missing is that a trade war would work to the benefit of those who are going to vote for Trump. We are a trade deficit nation which means a trade war makes the American people net winners. No other outcome is possible. Do the math! We lose only when we refuse to fight one. With one exception, which was after the economy had already tanked, every time we increased tariffs we had a soaring economy.

I am old and long retired. However, there is nothing in this article that I am not familiar with. Was CEO of a Multi-National Corporation for twelve years. And not just an employee, held senior Stock position.

America has been in a trade war since 1984. This war was of our own making, both for Political and Military reasons. Its birth was in 1971 along with another calamity, the new Monetary System.

This article is long on talk but short on history. The old reasons for it were of great success but that time is long past. Now we experience the consequences. Our trade policies should have been addressed decades past. One of the reasons is that we have Lawyer Politicians responsible for trade policy who have not a clue.

This slap on Trump is totally uncalled for. I am quite familiar with the organizations and people Mr. Trump associates with. How he attempts to communicate this to the general public is considerably different than addressing the issue in the Boardroom. Those who publish this site must be aware of this. Hence, it is nothing more than a RINO hit piece.

Reminds me of why, politically, I consider myself a Constitutional Conservative.

America has a huge Trade Imbalance draining the countries wealth. Are we to believe a Consumer based Society will not exasperate the problem?

It's totally amazing that everybody continues to criticize Trump and yet he's the only one coming up with any kind of viable plan. The American people are disgusted with the Republicans and Democrats constantly talking about the problems but doing absolutely nothing about it. The only time they try to put a positive spin on anything is when they're running for reelection and that's why we need term limits. There is really no difference between those representing us in Washington and throughout the nation whether they be Republican or Democrat. The only thing they're concerned about is their own reelections, special interests and partisan politics. They have long forgotten that they were elected to serve this nation and the American people. They have betrayed us constantly and have certainly betrayed this nation. Donald Trump is a welcome change and the only hope we have for America. There is no one that I know, or interact with, who does not support him. It would be a nice change if you got off of his back and start going after the people who have created the problems for the American people and the United States.

We need to do something about the unfair trade deals and Donald trumps the only one that suggested anything All talk and no action from our Congress Has gone nowhere We need some kind of penalty for breaking our trade deals it can't always be one sided money going out and none coming back the pot will soon be empty I support Donald Trump his idea It's better than none we can't keep going on with the same o same o and for another thing they need us more their economy depends on us .

This article fails in so many ways.

Wealth is only generated if something of value is produced. The nation which generates the most wealth (valued products) obviously is always the net winner. These global trade deals have done nothing but suck the net wealth out of America by taking advantage of the economic disparities between nations. The only true winner of so called free trade is multinational Corporations.

Why should American's be effectively barred from producing its own wealth by allowing government deals that encourages production of wealth to be outsourced outside our borders to where we now are forced to decrease our overall net wealth by having to buy more and more of our daily needs from outside sources rather than strengthening our own economy by producing what we need within our own borders.

Right now due to lack of protective measures we are on the losing side. And Trump has the problem rightly pegged with a fiscally sound solution.

The strength of a nation has always lain in it's self-sufficiency of providing for its own wealth needs.

A Word to the Corporations: If you've tapped your saturation point in America and still lust for more money than go into the other countries and internally build them up to our economic metric standards. Then and only then should free trade be on the table for discussion. Your proposal to enlarge your purses by sucking the wealth out of America through means of the disparities of national economies by manipulating inequitable free trade agreements with America is a crime against America being repugnant to America's foundational principal of self-sufficiency and the independence and freedoms provided thereby.

Currency Wars ( Currently in-progress), trade wars ( Trumps solution of 30% Tariffs on Chinese Imports), and capital controls are all measures you take to squeeze different vested interests ( domestic and foreign). Lots of enemies, real fast. In particular, Multinationals would not appreciate the hit to their global profits at all.

We would have high inflation with soaring import costs until we rebuilt our manufacturing capacity that was closed-down and outsourced for over 40 years. The quickest way to do that would be a new (World) War. Mobilize the labor force and put them to work in factories, like in WWII.

Unfortunately, we would not be able to rebuild fast enough before someone nuked our plans, nipping us in the bud, so to speak. As the saying goes, you can not turn back the clock. We have woke-up too late to make any difference now, as we are way past the point of no return. Tough luck. Missed the boat by 20 + years.