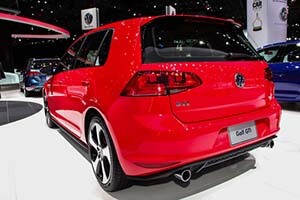 In 2013, the nonprofit International Council on Clean Transportation learned about Volkswagen AG's (OTCMKTS ADR: VLKAY) "defeat device." Complex algorithms allowed the device to detect when a diesel VW model was being subjected to emissions testing. It would then "switch" from low emissions to high efficiency output - essentially quelling the parts of the emissions control responsible for dirtier effusions.

Otherwise, the device remained inactive - allowing harmful diesel emissions to spew forth at levels way beyond the U.S. regulatory limit.

The ICCT, a nonprofit research group on clean transportation standards, tested VLKAY vehicles under actual road conditions, as well as in laboratories on "rolling roads" (essentially, large treadmills for cars that test their torque, power, and exhaust output).

All the diesel VW models failed. Levels of nitrous oxide emissions were 15 to 35 times higher than acceptable.

On Sept. 3, VW acknowledged that 11 million diesel cars had been designed with the "defeat device" active. The company has since set aside $7.3 billion for repairs, but that may not be enough, reported Forbes on Sept. 27.

While the Volkswagen recall cover-up may have inconvenienced more people in the world than any other auto industry recall in history, it has not been directly linked to any fatalities....yet. (The resulting pollution and whether or not it contributed directly to owners' health issues isn't easy to quantify.)

However, that wasn't the case with some of these other worst auto industry recall cover-ups in history...

Shocking Recall Cover-Up No. 2: On Feb. 7, 2014, General Motors Co. (NYSE: GM) recalled 800,000 cars worldwide to correct an ignition switch defect. Further complaints pushed the company to expand the recall to more models. By roughly halfway through the year, on June 30, GM had already issued 45 recalls in 2014 that included nearly 28 million cars worldwide and 24.6 million in the United States.

The core issue was that the ignition switches could slip out of the "on" position and cut power to the engine. This would also turn off airbags.

Today, 51 deaths have been linked to the bad ignition switches. The total number of injury claims stands at 4,180.

What's worse is GM knew there was a problem with the ignition switches, but attempted to hide it from the public...

General Motors documents came to light on March 12, 2014, that showed the company had known about the problem as early as 2001. Engineers had found ignition switches on Saturn Ions could turn themselves off. And later in 2005, GM engineers proposed to fix the issue, saying it was affecting the Chevy Cobalt model as well. Management ignored this offer.

But it did nothing.

Takata was able to cover up its airbag debacle for a short while by settling claims out of court one by one. But deaths and injuries continued to mount - so fast that safety advocates have stepped in to issue a warning that older Honda models are more likely to have Takata's faulty airbags.

When deployed, the airbags shot metal into drivers. In 2010, the front seat airbags burst in a woman's 2001 Honda Civic and shot shrapnel into her carotid artery. The woman was able to stop the bleeding but suffered serious health problems after the event.

The first known case of the defect dated back to 2007, when a man called 911 and said his Lexus would not slow down. The man had his entire family in the car, and they were approaching an intersection. The call ended when the car crashed, killing everyone inside.

On Jan. 21, 2010, Toyota began another recall in response to several complaints that accelerator pedals were also sticking. After the second issue came to light, Toyota misled consumers to believe that certain models were not in need of repair when they actually were.

A total of 89 people were killed and hundreds injured because of the faulty pedals.

Shocking Recall Cover-Up No. 5: In August 1977, Mother Jones writer Mark Dowie exposed Ford Motor Co.'s neglect of a defect in the Pinto's fuel tank that caused the car to explode on impact. The magazine ran the article "Pinto Madness." The piece claimed "for seven years, the Ford Motor Co. sold cars in which it knew people would needlessly burn to death."

When told of the problem, Ford executive Lee Ioccoca acted fast... to cover it up. Though the company owned the patent to a much safer gas tank, it would cost $200,000 to put in the new factory machinery.

So Ioccoca and other top Ford officials went forward with selling the faulty Pintos. They then lobbied against new auto safety standards being set in Washington. In fact, they were able to stall a government safety standard that would have required the company to change the Pinto's gas tank.

About 500 deaths resulted from the Pinto's faulty fuel system.

Wrong answer! It was the 'airbag gate', where Honda may be sued for 1000-1500 deaths (according to Washington Post article). This means every single Honda since 2000 should be recalled and I can attest, in the end, they will have to make it happen. This is one of two major reasons why the CEO of Honda resigned. This means, billions of dollars, if lawyers were smart enough to research death related airbag incidents, other companies included (selected few US companies), failed to address this after hiding it since 2006. Yes! Our favorite, once again Toyota (TB sensor gate-remember that one?), now Nissan, Toyota, Suzuki, Mitsubishi, will in the end, after final denial, will have to recall every single vehicle from 2000 to 2014. Go figure….however, another blundering federal agency, called NHTSA, who sought issues with the Jeep over rear tank design, I told Jeep to use their own high power lawyers and go after this inept agency. It was NHTSA who cleared that wonderful design rear bumper after the axle fuel tank in last century. Oh but wait! They are not admitting their own blundering mistakes? So resounding of the EPA and FDA constant mistakes. How ironic, Jeep is one of all world manufactures who had rear mounted bumper fuel tanks after the rear axle. Remember the Crown Vic fuel tank fires? So in the end, do you recall every single vehicle since 1900? Not the brightest people on the planet these few federal agencies. I would just sue the government in the end. Let the blame be on who approves it.

What never made the corporate news was Ioccoca's cover-up of the fatal exhaust system design in his '1975 Ford Mustang 2' where the twin tailpipes ended 6" short of the rear bumper.

Rather than extend the pipes to the perimeter of the car Ford saved a few pennies and condemned motorists to a slow death through CO asphyxiation but not before permanently damaging their sinus and bronchial passages. The aerodynamics of the undercarriage, combined with the exhaust pipe design, resulted in exhaust gases accumulating underneath when moving – but NOT when stationary. This meant Ford mechanics would've needed to put the car in a wind-tunnel to remedy the problem.

I know, for certain, this was the case as the manager of a Meineke shop explained it to ME after he welded extensions on my Mustang's tailpipes. I'd nearly died several times, and possibly taken others with me, as I dozed-off behind the wheel.