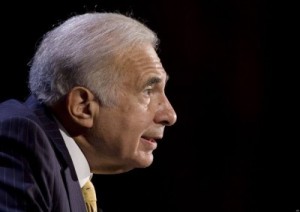 Having fallen more than 10% since late July, the Apple stock price just may be ripe for more buying, according to activist investor Carl Icahn.

"Apple, even in a bear market - it may get hurt, it may go down - but I think Apple is still ridiculously underpriced," Icahn said in a CNBC interview Wednesday.

Icahn owns more than 53 million shares of Apple Inc. (Nasdaq: AAPL) and has on several occasions urged CEO Tim Cook to enhance shareholder value by increasing the dividend and buying back shares.

But Icahn's relationship with Apple stands out as unusual for an activist investor. For the past year, Icahn has spent more time praising Apple and making wildly optimistic predictions (he said the AAPL stock price should be $203). Typically, activist investors agitate for changes in corporate strategy.

Icahn followed that same playbook when speaking to CNBC this week.

Why Icahn Wants to Buy Even More AAPL Stock

"They are still misunderstood by most of Wall Street. They say it's manufacturing. It's not. It's a great ecosystem," Icahn said.

And he admitted to being tempted by the current AAPL stock price of about $110.

"I am very seriously considering buying a lot more of it," Icahn said. "I would be buying much more if I weren't really concerned about the market."

Just days earlier, Icahn put out a video entitled "Danger Ahead: A Message from Carl Icahn" in which he discusses his concerns about the markets and the possibility of another financial catastrophe as bad as or even worse than the 2008 financial crisis.

It's possible Icahn is waiting for the markets to go south in a major way before scooping up more shares of companies he likes, such as Apple stock.

While it's always difficult to ferret out Icahn's real motives, with AAPL stock, he's mostly on target. Here's why...

Carl Icah would already be adding to his considerable Apple Position if the current price was really such a steal and the 'buy of a lifetime', as some put it. Instead, he is holding back. What does that tell you. He is not confident at this point to risk more capital.

Well, at what price should one put in a buy (limit) order for Apple ? You will NEVER hear a direct recommendation of that nature here, I guarantee it! Anyway, such discussions are plainly self-serving. We all must speculate and its so much easier to speculate on information about the future vs. putting our own cold hard cash on the line.

So, I don't listen to the many opinions, but only the market. Unless Apple's quarterly revenue really shines, the stock price is stuck about where it is for a while. How long is of course, always anybody's guess. I suggest $94.00, but that's my guess. Mine is as good as yours, and vice versa.