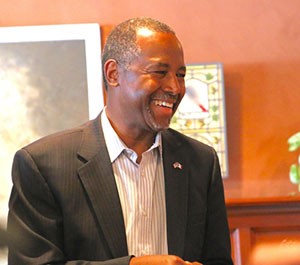 Ben Carson Net Worth: GOP presidential candidate Dr. Ben Carson has a net worth of $10 million dollars, according to The Wall Street Journal on July 14.

Ben Carson Net Worth: Where the Money Comes From

The vast amount of the Dr. Carson's total net worth comes from his successful career as a world-renowned neurosurgeon. The Johns Hopkins retiree is credited for overseeing the first successful removal of conjoined twins. He has been awarded 38 honorary doctorate degrees and several national merit citations. Carson's mixed well with Capitol Hill, as well. He was appointed to the President's Council on Bioethics in 2004. In 2008, he won the Presidential Medal in Freedom - the nation's highest civilian honor. And a Gallup poll in 2014 ranked Carson the sixth-most admired man in the world.

Ben Carson retired from his neurosurgery career on July 1, 2013, stating, "I'd much rather quit when I'm at the top of my game."

Now most of his cash flow comes from writing books, including an autobiography, and giving talks, reported Newsmax.com on June 4.

Carson earned between $8.9 million and $27 million in a 16-month period starting from the beginning of 2014, reported The Wall Street Journal's July 14 article. These figures were based on WSJ's analysis of financial disclosures it obtained. Carson gave more than 141 paid speeches and public appearances between the beginning of last year and the day of his official campaign announcement on May 4, 2015.

The Carson campaign has raised $10.5 million since March 2, reported WSJ. He raised $8.3 million of this total sum in the second quarter, which ended on June 30. WSJ also reported that the Carson campaign has spent over half of his funds, with an estimated 72% of the money going to fundraising costs. These costs include phone banks, direct mail, and email lists. Additionally, the campaign-finance disclosure released by Carson's aides showed that the candidate's team had spent over $1.2 million on web services.

Carson was ranked sixth on the list of presidential candidates' net worth, according to USA Today on Aug. 26, right behind Kasich, Clinton, Bush, Fiorina, and, of course, Trump.

How Much Is GOP Presidential Front-Runner Donald Trump Worth? That's a good question! Because there are varying answers, and they seem to depend on the time of day, the month of the year, and the mood "The Donald" is in...