For Oct. 2, 2015, here's how the Dow Jones Industrial Average did today, earnings reports, top stock market news, and stocks to watch based on today's market moves… 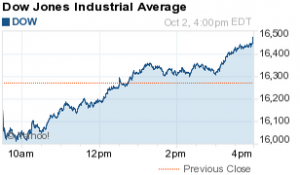 The Dow Jones Industrial Average today (Friday) reversed from a downturn in the morning and gained more than 200 points as energy stocks surged on rising oil prices. This morning, the U.S. Labor Department announced the unemployment rate remained unchanged at 5.1%. The economy added just 142,000 jobs in September, a significant miss from economic consensus expectations of 203,000. The markets gained as investors anticipated the U.S. Federal Reserve is now less likely to boost interest rates during the next FOMC meeting. The markets now predict odds of a little more than 50% that the Fed will tighten monetary policy in March 2016.

In the afternoon, President Barrack Obama hailed 67 months of job growth, but warned U.S. economic growth could slow if Congress does not reduce its calls for austerity. The President called a possible government shutdown a "manufactured crisis." He also said he will not sign any short-term bill like the one he recently signed to fund the government for an additional 10 weeks.