The Glencore stock price opened up 15% at 109.15 pence in London on Monday. That followed a 72% intraday surge for Glencore stock on the Hong Kong stock exchange.

The sharp rise in the Glencore stock price prompted the mining and commodity trading giant to issue a statement stating there was no news on its part to explain the blistering movement. Nearly 5 million shares had been traded by mid-afternoon in Hong Kong Monday. Typical volume is under 1 million.

The Glencore stock price calmed down after the announcement. Shares ended Monday up roughly 18% in Hong Kong. 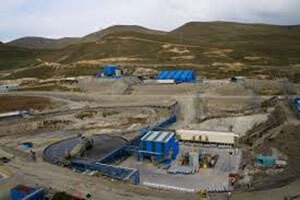 The company has been in damage control mode since last week amid a 29% single-day plunge and increasing concerns over the company's debt-laden balance sheet.

In his first public remarks since the Glencore stock price plunge last week, CEO Ivan Glasenberg blamed hedge funds, not tumbling commodity prices, for the company's crisis. Glasenberg accused hedge funds for artificially driving down copper prices. He said copper, the third most widely used industrial metal next to aluminum and iron, would rebound from its 25% year-to-date slump.

"The funds are playing the commodity cycle," Glasenberg said at the Financial Times Africa Summit in London. "But in the end the fundamentals will prevail." Glasenberg added that "demand is still there."

Glencore is particularly exposed to sliding copper prices. The metal is its biggest earnings driver, accounting for about one-third of Glencore's revenue. Glencore produced 730,900 tons of copper in the first half of 2015.

A 10% decline in copper would erase about $1 billion from Glencore's adjusted earnings, according to estimates by Liberum Capital. On the other hand, a 10% gain would be a boon for Glencore and help ease fears about its high debt levels.

Glencore has suspended operations at two African copper mines, which will remove some 400,000 tons of the metal from the market. The move, according to Glasenberg, will have a positive impact on prices.

Still, that would just alleviate one issue plaguing Glencore. The troubles for the company, and the Glencore stock price, run much deeper...