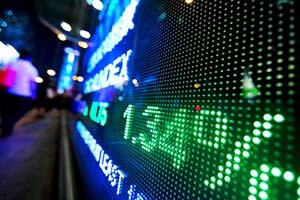 Futures for the Dow Jones Industrial Average today (Tuesday, Oct. 6, 2015) were down 13 points as traders began to eye earnings reports and mixed economic data. The unofficial beginning to earnings season begins on Thursday when Alcoa Inc. (NYSE: AA) reports after the bell.

On Monday, the Dow Jones Industrial Average gained more than 304 points as traders now anticipate the U.S. Federal Reserve will not raise interest rates in 2015 after Friday's weaker than expected jobs report. Yesterday morning, the United States and 11 other Pacific Rim nations announced an agreement on the Trans-Pacific Partnership (TPP), the most ambitious trade pact in decades. Despite significant skepticism from Congress, the new deal will create a massive free-trade zone that comprises 40% of the global economy.