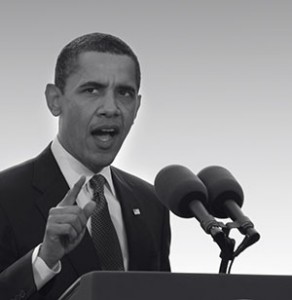 It's October, and the stage has been set a fifth time…

But should U.S. President Barack Obama veto the defense bill on Oct. 13, Sen. McConnell would need 60 votes to override.

U.S. President Barack Obama has already promised to do so. Should he make good, it will mark the fifth time he has vetoed a bill in all seven, almost eight, years of his presidency.

What’s in the Defense Bill?

The NDAA combines several defense policy issues. These include the closing of Guantanamo, a 1.6% raise for military personnel, and an increase in prescription drug co-pay for retired service members.

Obama has long been praised for frugality when it comes to exercising veto power. And with a Democratic majority in Congress for the first six years of his tenure, he also enjoyed a nice vanguard that kept many bills from even getting to his desk.

But the ones that did get through – the four previously vetoed pieces of legislature – all had one thing in common: predominant Republican support.

This calls into question the president's true veto motives. Were his vetoes reasonable? Or were they personal?

Full List of Obama Vetoes (Will the Defense Bill Be Next?)

Obama Veto No. 1: Obama's first veto took place during the holiday season on Dec. 30, 2009. The legislature concerned defense fund appropriations. The bill, however, duplicated another like it that had already been signed for the short-term, and so Obama found it redundant.

Before issuing a pocket veto, the president added his name to a "memorandum of disapproval" that explained what would need to happen to obtain his approval. What he wanted was a provision added that would "keep the Defense Department running in the absence of a regular appropriations bill," reported The New York Times on Dec. 30, 2009. But the defense fund appropriations have not been passed to date.

What Is a Pocket Veto?

A pocket veto is a veto exercised by one’s complete inaction (in lieu of affirmatively vetoing a bill). In other words, as opposed to actively saying “no,” the president doesn’t do anything with the bill. Hypothetically, this allows for Congress and the president to work toward a compromise.

Obama Veto No. 2: In October 2010, President Obama chose not to sign H.R. 3808. The bill encouraged business transactions – chiefly notarization recognitions – over state lines. This measure had passed through Congress without a single "nay." The bill's sponsor in the House, Rep. Robert Aderholt (R-AL), was surprised by Obama's interference after its speedy passage.

The president's administration argued the legislation was not focused enough on consumer protections, reported The Huffington Post on May 25, 2011. Ohio Secretary of State Jennifer Brunner told HuffPost, however, that it seemed like a maneuver on the president's part to serve as a "trap door" for banks to escape the financial crisis by not having to recognize notarized documents from other institutions out of state.

Obama Veto No. 3: The president famously vetoed the Republicans' Keystone XL pipeline bill on Feb. 24, 2015. An override vote failed on March 4, 2015 – just five votes short of the necessary two-thirds majority in Congress. Sen. John Hoeven (R-ND), a longtime supporter of the Keystone XL pipeline, told Yahoo! News that day that the effort to approve the pipeline would continue by attaching Keystone to another bill this year.

Regardless, "final reviews of the pipeline by eight federal agencies were complete," reported The New York Times on Feb. 24. "However, Mr. Obama is under no legal obligation to make a final decision, and there is no official timetable for a decision. He could approve or deny the project at any time – or leave the decision to the next president."

Obama Veto No. 4: On March 31, 2015, President Obama vetoed the passage of S.J. Res. 8, a congressional resolution aimed at blocking the implementation of the National Labor Relations Board's (NLRB) "Quickie Election" Rule. The NLRB Rule, which benefits organized labor by speeding up the union election process, went into effect on April 14, 2015. The President's veto meant that the resolution was dead because the Republican majority did not have the votes necessary to override the veto.

Congratulations! You're the Worst! The Volkswagen (VLKAY) recall cover-up, now known as "Dieselgate," just might be worthy of another title: The "worst auto industry recall cover-up of all time." That's not an award you want to hanging on your walls. Here are four more shocking auto recall cover-ups…