Sometimes a big trend isn't little enough - what I mean by that is that a big trend may not be as focused as you'd like. To really refine your profit potential, you've got to hone in on a sub-trend.

We're going to talk about that today and, specifically, how recent trading conditions have created an opening that most people don't see in a restaurant sector sub-trend driving one of the most powerful of our Unstoppable Trends - Demographics.

That sounds like a tall order, but it's not too hard if you know what to look for.

The last time I brought one of these sub-trends to your attention, Total Wealth readers who followed along had the opportunity to capture returns of 120.40% in less than nine months.

The opportunity I want to share with you right now could do even better... and even faster.

The key is something called "fast-casual" dining.

This Sub-Trend Has Already Created Millionaires - It's Your Turn

Let me set the stage.

Team Yellen insists that there's a recovery underway, and the Fed highlights falling unemployment and steadily increasing economic growth as a declaration that they're doing their job.

You and I both know that's not true for reasons we've talked about many times.

Case in point, a tight labor market would be characterized by higher wages and rising prices. Yet, wages are flat to falling, median household wealth continues to decline, and the percentage of working-age Americans with jobs is still below pre-recession levels. The most damning data of all, underemployment - meaning people who want to work full time but who are forced to work part time - is still near record highs. 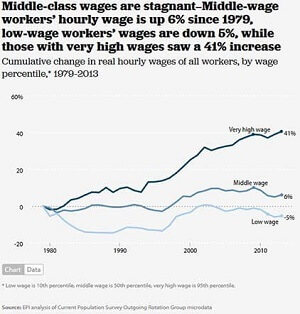 Not surprisingly, the Congressional Budget Office continues to lower growth projections, most recently dropping annual U.S. growth projections to just 2.0% in an August update to the Budget and Economic Outlook 2015 to 2025.

Now, here's where it gets interesting.

If you really pull apart the wage data, you see a very clear dividing line between high-wage, middle-wage, and low-wage jobs.

It used to be that Americans went to fancy restaurants all the time. High-end joints were all the rage for birthdays, anniversaries, parties, and much more. But now with wages crimped, that's changed.

They're still cheap, casual dining environments. But they're a step up from fast food, and the change has been so pronounced that it's left that industry in the dust. 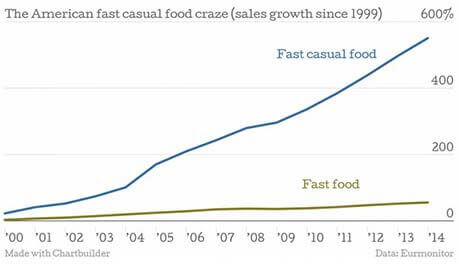 It's a fundamental change in America's $709 billion restaurant sector, and I want you to be ready to capture the next leg up.

Analysts Have Given You Another Fabulous Entry Point