With a national debt of $18.4 trillion, you'd think that tracking down and eliminating wasteful government spending would be more of a U.S. priority. 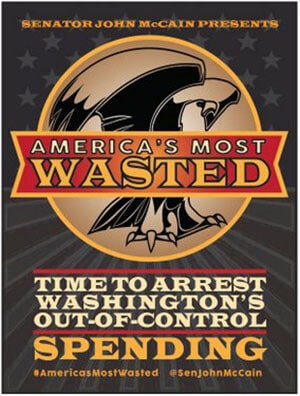 But although Sen. Coburn retired in January due to health reasons, two of his Congressional colleagues have picked up his battle flag. Rep. Steve Russell, R-OK, a Congressman elected to his first term in 2014, has published two editions of his "Waste Watch" so far this year.

Veteran Sen. John McCain, R-AZ, has vowed to do the same and so far has put out one edition of his "America's Most Wasted."

Both lawmakers say they aim to carry on Coburn's goal of bringing attention to ridiculous examples of wasteful government spending in the hope of stopping it, or at least reducing it.

"At a time when Americans' disapproval of government is at an all-time high, it has never been more important to reign-in spending and put our fiscal house back in order," McCain wrote in his May report.

Here are a few of the most embarrassing instances of wasteful government spending uncovered by Russell and McCain so far this year:

We're only just getting started. Would you believe the U.S. military spent nearly half a million dollars on walls that melted in the rain? Read on…

I thought these people went to college because they were smart. Even kids would know you can not take an elephant into a war zone.