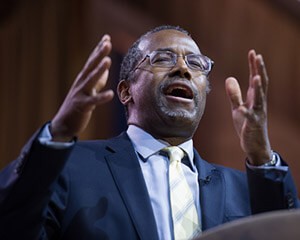 First, Carson discussed instating a 10% flat income tax. When asked, "Why 10%?" Carson stated that it would make the number-crunching easy.

"The principal I'm espousing is complete fairness," he said. "You make $10 billion, you pay a billion. You make ten, you pay one, and you get exactly the same rights and privileges. That's pretty fair. You have to remove all the loopholes, all the deductions."

Second, the new Ben Carson tax plan proposes a change to U.S. corporate tax law. Dr. Carson would declare a six-month "tax hiatus" for large businesses to bring more than $2 trillion currently held overseas back to America. This tax "vacation," however, would come with a condition: "I would stipulate that 10% of it had to be used in enterprise zones [impoverished areas] that we'd set up in some of our major cities, or to create jobs for people who are unemployed and on welfare," he said.

Once a corporation's tax holiday was over, Carson explained, corporate taxes would kick back in again, only at a lower level than average around the world. "I want us to become a tax haven for people because it also becomes an opportunity haven for people," the retired neurosurgeon said. (Currently, the United States has the highest corporate tax rate in the developing world at 39.1%. This lofty amount has prompted many of the best U.S. companies to "invert," or to buy up foreign subsidiaries in order to relocate headquarters, thus decreasing their annual tax rates in the process.)

Carson went on to say the tax break would be the largest stimulus ever initiated since the era of the New Deal and FDR. He added that it wouldn't cost the taxpayers a single dime.

Third, Carson said he would have the Trans-Pacific Partnership (TPP) renegotiated "because," he told CNBC viewers, "right now we have a lot of special interest groups who benefit." The next step for the TPP is for it to pass through Congress, where Republicans chiefly approve of it, while Democrats largely do not.

Carson is currently polling in second place in the 2016 GOP presidential race with 17.2%, according to the latest RealClear Politics poll aggregator. He is behind real estate mogul Donald Trump, who remains in the lead with 23.2%. Former Hewlett-Packard Co. CEO Carly Fiorina is in third with 10.4%.

How Much Apple Can an Apple Hacker Hack? The seemingly impenetrable Apple Inc. (Nasdaq: AAPL) was hacked through the app store in late September. Dozens of apps infected iPhone and iPad users with malware. WeChat, one of the affected apps, has 600 million users who could have been exposed to the breach. We couldn't think of a better time to invest in this cybersecurity ETF...

America needs a tax structure that encourages investment and productivity and a spending plan that discourages idleness.