Editor's Note: We're sharing this Power Profit Trades with you today because, once you see how this works, you'll be able to get the best possible entry and exit points on every trade. It's that powerful. Here's Tom…

Prior to moving into trading full time, I spent a number of years with a leading global home improvement company. One thing I learned in that culture is that a tool that serves multiple purposes is worth its weight in gold. Multipurpose tools are economical, time efficient, and allow you to accomplish much more than you planned due to their versatility.

In trading terms, one of the best multipurpose tools is the moving average – the average price data of a stock or ETF over a specific time period.

But this versatile technical trading indicator is like a Swiss Army knife for traders. It is one of the best "go-to" technical indicators in my trader's tool chest.

Let me show you what else it can do…

As you've seen, the simple moving average (SMA) is a great way to discover a stock's trend – where its price has been and where it's going.

But as I mentioned, you can also use a moving average to determine a given stock's support and resistance levels.

Support is the price range at which a stock is supported from trading any lower in price. Downtrends in price tend to slow as a stock approaches support thanks to a concentration of demand – a number of traders willing to buy at that level.

Resistance is the price range at which a stock resists going any higher in price. Uptrends in price tend to lose steam at resistance thanks to a concentration of supply – a surge of traders willing to sell at that level.

And so for a bullish trade, you want to buy the stock or call options at a support price and sell when it trades to a resistance price.

The premise of trading support to enter a position is that buyers will come in at that support price and buy up the stock for any number of reasons: They believe it is fairly priced at that number, or perhaps the stock bounced up in price off that support level multiple times.

Here is an example of the 200-day SMA serving multiple purposes for me on the chart for Nike Inc. (NYSE: NKE). Take a look: 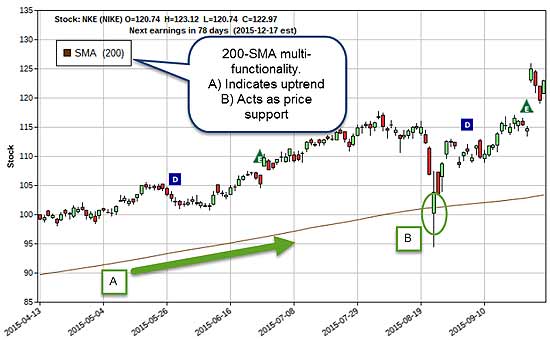 This chart tells me two things:

You can see that technical analysis isn't so much a science, but a bit of an art form, as the price did trade under the 200-day SMA during the day versus trading on it right to the penny. If you're trading on support/resistance, you can set your stop order trigger if the stock closes below the 200-day SMA – a good indicator that it's time to cut your losses.

Now, there isn't one universal moving average for every underlying stock. Different stocks will react differently to different moving averages – for instance, you'll see a different picture if you use the 50-day SMA as opposed to the 200-day SMA.

Your "job" as a technical trader is to look at different moving averages, see how a stock reacts, and figure out how to trade accordingly.