For Oct. 8, 2015, here is your stock market news and stocks to watch based on today's market moves… 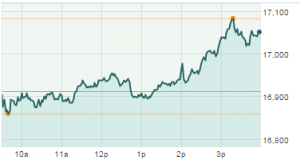 The Dow Jones Industrial Average today (Thursday) added 138 points after the U.S. Federal Reserve released minutes from its September FOMC meeting, where the central bank decided to maintain interest rates near record lows. According to text of the meeting, the bank was close to raising rates, but members of the committee were more concerned about finding new evidence that concerns about the global economy would not knock the United States off track. These same concerns are affecting quarterly earnings outlooks, as slowing economic growth abroad and a strong dollar are affecting company profits. This is expected to be the worst earnings season for S&P 500 companies since 2009.