General Electric Co. (NYSE: GE) is one of America's classic companies – more than a century old, one of the original components of the Dow Jones Industrial Average, ranks 8th in the Fortune 500.

And it just became a target of activist investor Nelson Peltz.

His Trian Fund Management said it had bought $2.5 billion of GE stock and is now a top 10 shareholder. Peltz wants GE to increase its cost-cutting and shift further away from financial operations.

Peltz's stake in GE is part of a shift in activist investing. Over the past decade, activist investors like Peltz have gone after bigger and bigger companies as their assets have grown.

For investors, this means that any stock you own could become an activist investor target. That's not necessarily a bad thing, but activist funds make fundamental changes to corporate behavior.

The top activist investors, which include such names as Dan Loeb of Third Point LLC and Bill Ackman of Pershing Square Capital, can make a lot more happen than just a boost in stock buybacks and dividend payouts.

What Carl Icahn, Nelson Peltz Are Capable Of 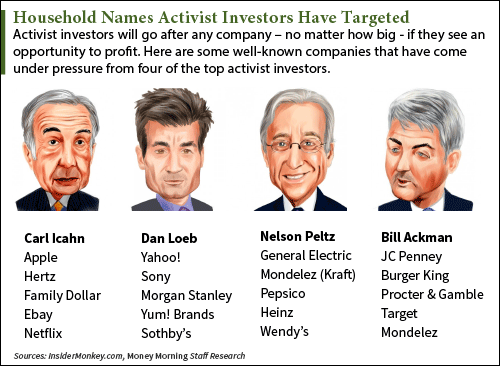 And it seems the drumbeat of activist fund activity rarely lets up. Yesterday (Wednesday), just two days after we learned that Peltz had targeted GE, Carl Icahn announced that mining company Freeport-McMoRan Inc. (NYSE: FCX) had agreed to add two Icahn allies to its board.

So when a Carl Icahn or Nelson Peltz buys a large stake in one of your stocks, you need keep a close eye on the changes they're seeking.

But what they do can work to your advantage…

When an Activist Fund Targets One of Your Stocks