It has become an article of faith that the Bitcoin price is volatile. 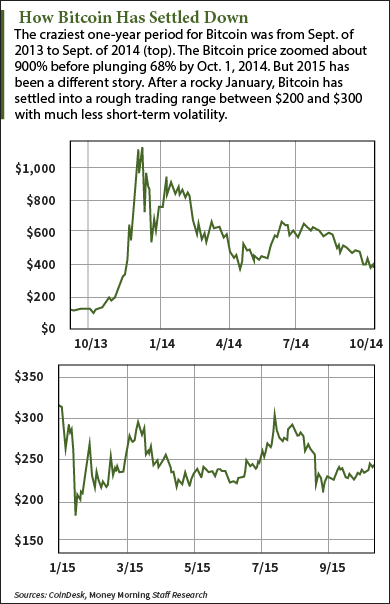 Throughout it all, fans of the digital currency have made sky-high Bitcoin price predictions – $1,000, $10,000, and higher. And when the Bitcoin price was bottoming in December and January, critics declared it dead.

But after January, the price of Bitcoin did something neither the enthusiasts or the critics saw coming.

Not that the Bitcoin price hasn't had some ups and downs. But for the past eight months, it hasn't moved as far and as fast as it had been.

For example, in mid-January, the Bitcoin price dropped 33% in two days. But since early February, it's taken seven days to get moves as big as 15% to 20%.

The main thing this tells us is that Bitcoin is here to stay and not destined to fade into oblivion, as many predicted at the end of 2014. If Bitcoin were going to disappear, the price would have just kept on dropping.

Yet that still leaves a lot of questions about where the Bitcoin price might go next.

How long will it stay in the $200-$300 range, where it's traded since early February? And in the years ahead, how will the financial world's fascination with the blockchain – the technology that underpins Bitcoin – affect the Bitcoin price?