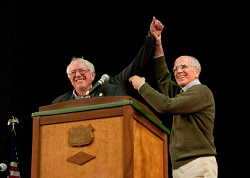 Like the politician himself, Bernie Sanders' debate tactics and preparations are a little bit unorthodox.

For starters, the Vermont senator didn't start studying for the actual showdown until a little over a week ago, reported Politico on Oct. 8. Compare that to Democratic front-runner Hillary Clinton, whose top aides have been preparing for months.

According to Politico, Sanders' top two aids finally got the guy to answer one question: Do you have a debate plan?

"Sanders has long refused to launch any rhetorical aggression toward any of his fellow running Democrats this entire time."

Not really, at least. The Vermont senator has briefing books, and he's had a few meetings with policy experts.

While Sanders acknowledged the stakes are high, his aids purportedly expect he'll go about the debate like he's gone about all of his public appearances: prepared to stand his ground if attacked, but otherwise eager to broaden his name recognition among the Democratic electorate.

Joe Trippi, who managed the 2004 Howard Dean campaign, explained to Politico that Sanders' primary focus will be to "bridge out to more moderate blue-collar Democrats." Essentially, this means he'll have no time, or need, to waste on attacking his fellow Democratic candidates. Not that he would; Sanders has long refused to launch any rhetorical aggression toward any of his fellow running Democrats this entire time.

Sanders also told his aids that they shouldn't bother to create any sort of mock debate scenario for him, reported Politico. Bernie Sanders' debate style is such that he dislikes "going through the typical debate motions." All he's concerned about is getting up there, laying out his policies and plans, and leaving a lasting impression on voters.