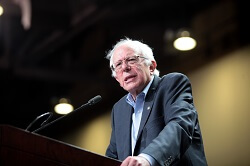 Here are the most important details...

Democratic Debate Preview: When to Watch

Tomorrow's Democratic debate starts at 8:30 p.m. ET on CNN and CNN.com. It will be filmed live from Wynn Las Vegas casino hotel.

The debate will be chiefly moderated by Anderson Cooper, though Dana Bash and Juan Carlos Lopez will also ask questions.

The position of the five participating candidates onstage was just announced on CNN's "State of the Union" today. According to the media outlet, the order was based on the accumulated results of polls taken between Aug. 1 and Oct. 10, 2015.

Notably missing from the list is, of course, Vice President Joe Biden - though should he announce a run between now and 8:30 p.m. Tuesday evening, there will be a space available for him on stage.

One Democratic candidate - campaign finance reform activist and Harvard law professor Lawrence Lessig - will not be permitted to participate. He didn't meet the CNN debate requirement of polling at least 1% in accumulated polls.

As far as what to expect from each candidate in terms of their behaviors and perspectives, various media all seem to predict the same outcome: It will be a great debate for Sanders tomorrow night, a rollercoaster for Clinton, and nobody cares about the other guys.

Clinton is still considered the Democratic front-runner. She's also considered the most controversial of candidates on stage. While the former first lady performed strongly in the Democratic debates during her 2007-2008 campaign, she is now facing more criticism from members of her own party, reported Vox earlier this morning.

Historically, Clinton has been far more centrist on issues such as Wall Street regulation and "taking on the one percent." However, she has recently expressed a more populist approach to monitoring Big Banks. This shift in perspective has drawn a lot of criticism from both Democrats and Republicans alike who believe Clinton simply flip-fops her stance on issues to align with the most popular voter perspective of the moment. Another recent example of this is her opposition to the Trans-Pacific Partnership (something for which she once expressed great support).

Viewers can expect to see her questioned on these issues.

Somewhat ironically, Sen. Bernie Sanders will be situated on stage to the left of Clinton. The debate has nothing short of an upside for the Vermont senator, reported The Washington Post today. While he also opposes the Trans-Pacific Partnership, he has always opposed the deal. He'll likely remind viewers that, unlike Clinton, he adheres to the issues he opposes and/or supports - a testament to his authenticity.

Former Virginia Sen. Jim Webb is known for getting fired up in debates. WSJ predicts that he may shake things up. But he also may not. This is because his stance on the issues isn't entirely clear.

As for Webb and former Maryland Gov. Martin O'Malley, both Vox and WSJ emphasize this first Democratic debate will be their time - perhaps their only time - to make a lasting impression on the voting public.

You Say "Tomato," I Say "Occupy Wall Street": The star of the Hillary Clinton-Wall Street farce herself, Democratic presidential candidate Hillary Rodham Clinton, recently announced her plans to crack down on Wall Street. Here's more on how she intends to accomplish this goal.