FedEx Corp. (NYSE: FDX) delivers "the world on time" to its customers and slow, steady growth – along with a $0.25 dividend – to its shareholders.

In fact, in 1983, it became the first American company to pull in more than $1 billion in revenue without any mergers or acquisitions, and it's been outperforming ever since.

FedEx makes a good, if expensive, foundational holding, but its $44 billion market cap, low volatility, and 282.3 million shares make it close to the last stock you'd ever expect to double your money quickly, let alone in less than three weeks.

But thanks to the easy, inexpensive trade I'm about to show you, that's exactly what happened.

In the Know
The lingo for buying and selling options is different from stocks. These will be helpful to know as you take in more profits in your trading…

Buy-to-open: Use this when you want to purchase a call or put option. The premium is debited from your account.

Sell-to-open: Use this when you're selling a call or put on stocks that you own or have borrowed on margin.

Buy-to-close: Closing a short position on a stock you have borrowed on margin.

Sell-to-close: Selling an option that you own and exiting your long position.

I Spotted This on My Money Calendar

I use my "Money Calendar" to zero in on trades that have a better than 90% chance of delivering triple-digit (or better) gains in the shortest possible time.

It's been a reliable way to take down gain after big gain, and back on Sept. 22, the Money Calendar was telling me it would be a really great idea to schedule some quality time with FedEx in late October.

And to get the most possible money out of this trade, a "loophole" was in order.

Technically, this is a bull call spread, and it's the way to go when you expect the stock to go higher but you don't want to leave yourself exposed to so much risk.

So, on Sept. 22, I let my Money Calendar Alert members know what move we should make.

The profits that came quickly afterwards were so fast, they shocked even me… 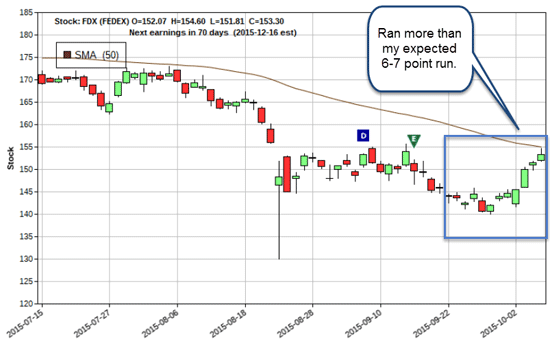 You see, I was only expecting FDX shares to mount a $6 or $7 run by Oct. 22, so the "exit strategy" I set up had my readers prepared to take profits with these instructions: