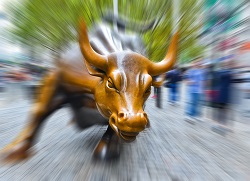 Futures for the Dow Jones Industrial Average today (Tuesday, Oct. 13, 2015) were down 85 points as the global markets reacted to news of weak Chinese trade data and reports that the People's Bank of China is pushing fresh stimulus measures.

On Monday, the Dow Jones Industrial Average added 47 points during a light trading session. Investors kept their focus on a falling U.S. dollar and the growing expectation that the U.S. Federal Reserve will not raise interest rates in October or December. With just one major company reporting earnings during a federal holiday (Columbus Day), traders bent an ear to speeches by three members of the Fed Open Market Committee.