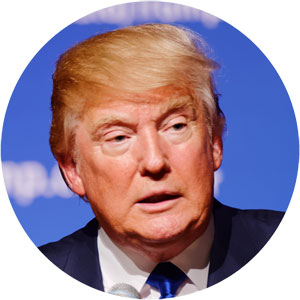 Yet there are peculiar Donald Trump-Bernie Sanders parallels: The two 2016 presidential candidates resonate with voters for many of the same reasons…

Both have won over their respective voting bases with similar personas. These five characteristics – all essential traits at the core of their polling success – fairly describe both men:

But the similarities between Donald Trump and Bernie Sanders continue beyond a list of adjectives.

When it comes to some of the most fundamental issues at the heart of the 2016 presidential election, these two men oftentimes match up…

Trump and Sanders both oppose the relaxation of immigration laws. They want strong border control.

Trump's Aug. 16 immigration proposal states that "real immigration reform puts the needs of working people first – not wealthy globe-trotting donors." Trump insinuates that liberals want open borders because they own the immigrant vote, and so it helps keep them in office.

Sanders also insinuates open borders is a policy that would only serve to help the party he opposes, the GOP. Here's what he said to Vox Editor-in-Chief Ezra Klein on July 16:

Ezra Klein: You said being a democratic socialist means a more international view. I think if you take global poverty that seriously, it leads you to conclusions that in the U.S. are considered out of political bounds. Things like sharply raising the level of immigration we permit, even up to a level of open borders. About sharply increasing…

Bernie Sanders: Of course. That's a right-wing proposal, which says essentially there is no United States…

"[Open borders] would make everybody in America poorer – you're doing away with the concept of a nation state, and I don't think there's any country in the world that believes in that," Sanders said in the same interview. "If you believe in a nation state or in a country called the United States or UK or Denmark or any other country, you have an obligation in my view to do everything we can to help poor people."

"We are the only country in the world whose immigration system puts the needs of other nations ahead of our own… The costs for the United States have been extraordinary: U.S. taxpayers have been asked to pick up hundreds of billions in healthcare costs, housing costs, education costs, welfare costs, etc. Indeed, the annual cost of free tax credits alone paid to illegal immigrants quadrupled to $4.2 billion in 2011. The effects on jobseekers have also been disastrous, and black Americans have been particularly harmed."

Just on Oct. 12, Trump said he and Sanders "get along" on trade deals.

"Well, Bernie Sanders feels strongly about trade because he knows, and one thing I will say about him, he knows we're being ripped off on trade. And he's the one politician that talks about that," Trump told reporters outside of the No Labels' "Problem Solver Convention" in Manchester, N.H. "Outside of Bernie Sanders, I don't hear people talking about it. So if you talk about the one issue I would say we get along with, I am very, very strong about having great trading deals."

Both candidates have denounced the Trans-Pacific Partnership trade agreement.

"Wall Street and other big corporations have won again," Sen. Sanders said in an Oct. 5 statement. He vowed to "do all that I can to defeat this agreement" in Congress.

Trump has loudly criticized CEO pay. While appearing on CBS' "Face the Nation" on Sept. 9, Trump called CEO pay outrageous and said that it's very hard to have CEOs removed from their powerful positions. He said CEO salaries should be lowered.

Sanders has made the same criticism.

"The average chief executive in America now makes nearly 300 times more than the average worker – and the gap between the people at the top and working families is growing wider and wider," Sanders stated on Aug. 5. "I hope that shining a spotlight on the disparity will help working families." 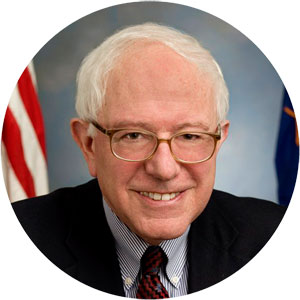 According to the U.S. Bureau of Labor Statistics, the latest unemployment rate is 5.1% in September. But if you ask Sanders or Trump, the government's professed number is a lie.

On Aug. 9, Bernie Sanders told a crowd of supporters in Portland, Ore., that "real unemployment" in America is over 10%.

And in his official presidential announcement speech on June 16, 2015, Donald Trump stated that "the real number, the real number is anywhere from 18 to 19 and maybe even 21%, and nobody talks about it, because it's a statistic that's full of nonsense."

What's more, both candidates have been very vocal about the need for job creation.

"I will be the greatest jobs president that God has ever created," Trump stated in his presidential announcement speech on June 16.

Both candidates poll well when voters are asked which candidate would best handle the economy, according to CNN on Aug. 13. "Economists may be cringing, but a lot of voters like what they're hearing from Trump and Sanders on jobs."

Both candidates want to increase the income tax rate for the rich and lower it for the poor.

According to Trump's tax plan released Sept. 28, Trump wants a zero-tax rate in the lowest tax bracket. No federal income tax would be levied against individuals earning less than $25,000 and married couples earning less than $50,000. Trump said the change would eliminate taxes for an additional 31 million Americans.

Trump's tax proposal would also take away deductions and "loopholes" enjoyed by hedge-funders and other wealthy elite. According to Trump, "There will be people in the very upper echelons that won't be thrilled with this because we're taking away their deductions."

Meanwhile, Sanders has also stated he wants to raise the top tax bracket, but hasn't yet elaborated a specific rate. We also know he wants to end foreign tax credit loopholes that big American corporations enjoy, as well as rules that let the companies defer paying federal income tax on profits of offshore subsidiaries.

They agree Obamacare did not go far enough to provide Americans with quality healthcare.

"Americans spend about twice as much per capita on healthcare as almost any other developed nation, but our outcomes are not as good as others that spend much less," Sanders wrote in an official statement on Sept. 11, 2013. "We can do better. We must do better."

Follow the Money: Politicians famously fail to follow through on their campaign promises once elected. For recent examples, look no further than U.S. President Barack Obama, or Republican congressional leaders. Obama has kept less than half (45%) the promises he made during the 2008 and 2012 presidential cycles, according to PolitiFact. Meanwhile, GOP members in Congress have delivered on only 38% of their 2010 campaign pledges. Contenders in the 2016 presidential election will likely follow the trend. That's why we used unbiased FEC data to identify the top campaign contributors to each of the 2016 presidential candidates …

"The Right" is a hollow name, now populated by the fringe.