The list of Hillary Clinton lies is long, but most of those were told to protect her career or to burnish her image.

During the Election 2016 campaign, we've heard more of those, but we've also heard Hillary Clinton lies of a different sort.

I'm talking about her flip-flopping on issues. A lot of issues. 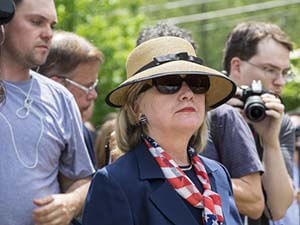 Now, with gay marriage and the Iraq war, Hillary Clinton has a lot of company. And she may genuinely have had a change of heart, as many politicians have.

But in other cases, such as the Trans-Pacific Partnership (TPP) trade deal, it's hard not to view her flip-flop as political opportunism.

Not that this is rare among politicians. But as rival Bernie Sanders, the socialist senator from Vermont, has gained on her in the polls, Hillary has flip-flopped much more than the average candidate. She's elevated it to an art.

For voters, that makes it hard to know what Hillary really believes. Which position is sincere and which taken for political expediency? Which are the Hillary Clinton lies, and which are her true opinions? And if she wins the White House, which positions will she take as president?

It's almost impossible to tell what she believes. And all the flip-flopping is a major reason that in a Quinnipiac poll taken last week, 61% of voters said Hillary Clinton is not honest and trustworthy.

Even her liberal supporters are getting snarky about it.

A headline last week on Slate read, "Hillary Clinton Comes Out Against TPP, at Least Until the Democratic Convention."

So what was the Hillary Clinton flip-flop on the TPP?

This trade deal has been in mostly secret negotiations for about 10 years. The TPP breaks down trade barriers much as the North American Free Trade Agreement did. The 12 member nations all sit on the Pacific Rim and include Peru, Australia, Japan, and Vietnam.

As secretary of state, Hillary Clinton worked with the U.S. Trade Representative in the crafting of the deal. And back then, she thought it was a good move. According to CNN, she has praised the TPP on no less than 45 separate occasions.

And often she was effusive. In November 2012, Hillary Clinton said this in her official remarks during a visit to Australia:

"This TPP sets the gold standard in trade agreements to open free, transparent, fair trade, the kind of environment that has the rule of law and a level playing field. And when negotiated, this agreement will cover 40% of the world's total trade and build in strong protections for workers and the environment."

But in the spring and summer, Bernie Sanders made the TPP a campaign issue. He strongly opposes the deal, as do many in the Democratic Party.

In June, Hillary wavered, saying she would "probably not" vote to fast-track the TPP if she were still a senator.

By last week, the flip-flop was complete: "As of today, I am not in favor of what I have learned about it," she told PBS, saying it would "kill American jobs."

Odd how Hillary is just now learning about a deal that she helped create.

But the TPP flip-flop is just the one of many Hillary Clinton lies to herself.

You once had tricky Harry, how about tricky Hillary now

It was such a relief to hear thoughtful, considered rational debate rather than the embarrassing psycho ward that is the republican morass. I thought this was an investment site not a propaganda vomitorium. Please, give me sound financial advice and keep the spectacularly uninformed politics to yourself.

Go crawl back into that dark hole you came out of. Its not Groundhog Day.