Editor's Note: We're sharing this update on Glencore's collapse with you because it's shaping up to be even worse than Michael originally thought. Glencore still poses a "Lehman Brothers"-level risk to the global economy - but it's now clear the world's biggest commodities trader is on the hook for hundreds of billions in "shadow debt" that it simply refuses to address. This crisis is one small step away from upending our financial system, so here's what you need to know...

A lot of powerful voices have joined me in warning about the potential threat that Glencore Plc. (LON: GLEN) poses to global financial markets. Bank of America, for instance, has published a report on the true size of the fallout. As you'll see in a moment, it's staggering.

But since we talked about Glencore late last month, something insane has happened: The stock has gone up.

But not for any good reason. The company has not righted the ship. The surge is only due to short-sellers covering their positions. 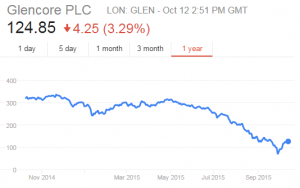 The ugly truth is, the company is still a "shining" example of exactly what's wrong with these markets.

And I fear individual investors will get caught in the mess and wiped out on a stock like this or some of the others around it.

That's why I want to call out the misapprehensions and lies that are causing this "fauxcovery" and show you what's next.

Because it could end up even worse than I thought...

Glencore Is Doing Everything Possible to Calm Markets

To place the last point in context, however, markets are pricing the company like a weak single B credit instead of a CCC credit. So while the major credit rating agencies still consider Glencore an investment-grade company, the actual credit markets have a much dimmer view of its prospects.

Naturally, the company is doing everything possible to calm markets.

First, last week it took the unusual step of publishing a six-page "funding factsheet" designed to dispel market concerns about its liquidity and solvency.

Here's the thing - "industry standard frameworks" normally require companies to post additional cash collateral upon the loss of an investment-grade rating, so the company's statement should not have made anybody feel better.

That suggests to me that the rise in the company's stock price was largely a matter of short covering, not investors suddenly deciding that everything is hunky-dory in the House of Glencore.

Second, Glencore is blaming everyone from short sellers to industry rivals for its problems.

Non-Executive Director John Mack, who led Morgan Stanley (NYSE: MS) to the brink of insolvency during the financial crisis, told Bloomberg that speculators in the company's credit default swaps were responsible for creating a false impression that the company is in trouble.

This attempt to scapegoat the credit default swap market demonstrates why Mr. Mack allowed Morgan Stanley to come close to collapse under his watch in 2009.

The truth is, there are a lot more legitimate lenders looking to protect themselves against losses on their Glencore exposures than speculators looking to make a fast buck on the company's collapse.

Then there's Chairman Ivan Glasenberg, who blamed mining rivals for oversupplying the commodity markets. This is like the Devil preaching against sin.

This market seems ripe for a fall.

Sure hope Morgan Stanley is not lending money to Glencore. That would put FDIC on the hook to cover depositor or client losses. It could also weaken the firm. So, more firms getting weaker suggests we are possibly headed for trouble again.