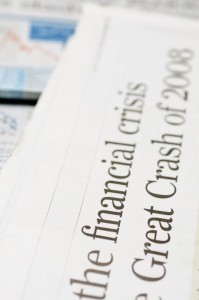 It’s official. According to a report compiled by Goldman Sachs Group Inc. (NYSE: GS) analysts and released on Oct. 12, the 2008 financial markets is still crawling along – and, in fact, we’ve just entered its “third wave”…

These three factors emerged from the first two preceding waves: the investment banking and real estate collapse in the United States in 2007, and the European sovereign debt crisis of 2009. Combined, they make up what Goldman Sachs is calling a “debt super-cycle.”

Goldman Sachs Financial Wave No. 1 – The Investment Banking and Real Estate Collapse, 2007-2009: Ultimately, this crisis was prompted by the private sector’s lust for quick money. The U.S. Federal Reserve lowered interest rates following the 2000 dot-com crash all the way to 1%. Asset managers couldn’t profit from municipal bond or Treasury yields at this rate, so they turned to high-risk mortgage-backed securities. “Innovative” mortgage products were then developed to reach more subprime borrowers. These products included: adjustable-rate mortgages, interest-only loans, piggy-bank mortgages, and negative amortization loans (borrower’s indebtedness goes up each month). The proportion of traditional 30-year fixed mortgages to these other loans were vastly disparate.

Hold on to that thought… 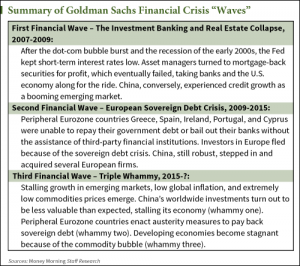 Goldman Sachs Financial Wave No. 2 – European Sovereign Debt Crisis, 2009-2015: The European sovereign debt crisis began at the end of 2009 when Greece, Spain, Ireland, Portugal, and Cyprus were unable to repay their government debt or bail out their banks without the assistance of third-party financial institutions. Directly contributing to this crisis was Europe’s own 2007-2008 real estate market crisis during which property bubbled in many European countries. For example, Ireland’s banks generated a massive housing bubble because the banks loaned money to property developers. As this housing bubble burst, both the government and taxpayers were held responsible for these private debts.

Then, as investors in Europe fled because of the sovereign debt crisis, China stepped in. Chinese companies and firms moved into some of the most cash-strapped European countries, buying up and taking over companies. In fact, Chinese investment stock had quadrupled in Europe by the end of 2012 to nearly €27 billion, reported Financial Times on Oct. 6, 2014.

Goldman Sachs Financial Wave No. 3 – Triple Whammy, 2015-?: As mentioned, this wave is characterized by stalling growth in emerging markets, low global inflation, and extremely low commodities prices. While Chinese investment exploded through the first and second waves, “trillions of dollars' worth has most likely been extremely inefficient, or even wasteful. Slower growth means the debt that investment produced will be harder to service. At best, that will be a painful readjustment period for China,” reported Business Insider.

As central banks in the developed economies now start talking about raising interest rates again, rates on safer assets and government bonds should go up. This creates less incentive for debt investors to take risks overseas to get a decent yield, so they move their money out of emerging markets. The Chinese economy is effectively stalled (whammy one).

Meanwhile, European countries in financial crisis, like Greece, are working to pay back their sovereign debt to other governments using money borrowed from the ECB or the IMF. While this is good for the countries being paid back (Germany and France, for example), it’s still bad for Greece, because now it owes a larger entity under harsher stipulations (austerity measures, for example). Hence, low global inflation, particularly in the Eurozone (whammy two).

As far as commodities go (whammy three), it’s important to remember how linked they are to the function of emerging markets. Developing economic countries depend on the extraction and exportation of particular resources more so than do developed economic countries. Currently, we’re in the aftermath of a commodity price bubble bust. We’re seeing cancelled projects and investments dying down. Oil prices hit their lowest level in six years on Aug. 21.

Low commodity prices are what could, in turn, prompt central banks to keep interest rates low. And keeping interest rates low could prompt skeevy bankers to turn elsewhere for profits – just like they did with high-risk mortgage-backed securities in the first wave.

What the Heck Are You Doing? Like the politician himself, Bernie Sanders' debate tactics and preparations are a little bit unorthodox. In fact, the Vermont senator's top two aids finally got the guy to answer one question: Do you even have a debate plan? Here’s his answer…