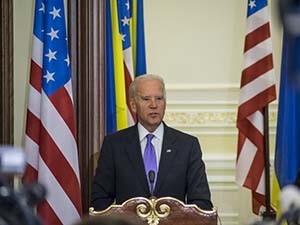 Is Joe Biden running for president after the first Democratic debate of 2015?

Perhaps the vice president sat out the first showdown on Oct. 13 to size up his party opponents from afar. Or, perhaps Biden simply cannot decide whether he wants to run. Either way, a post-debate entry now means he's got a difficult road ahead... all thanks to Democratic front-runner Hillary Clinton's and Sen. Bernie Sanders' (I-VT) oratorical successes.

In particular, most chatter the day after the debate seems to center around Clinton's performance.

Even Donald Trump praised her. "She got through it fine," the real estate mogul told ABC News on the morning of Oct. 14. "It was a very kind debate, very gentle. She came out the winner."

Biden now faces additional hurdles should he choose to enter the race.

Here's what those who live in the world of politics have to say...

Is Joe Biden Running for President Now? Here's the Consensus

Following the debate, Washington Post journalists approached members of the Clinton campaign for their assessments on the viability of a successful Biden campaign at this point.

"He needs to make up his mind," Clinton campaign manager John Podesta told The Washington Post. "[Hillary] put in a tremendous debate performance tonight and I think that she occupied a space in the party that showed that she was going to fight for this nomination, take the fight to the Republicans, put forward a program that people could really grab onto, believe in, and she was going to fight for the people she's been fighting for all her life. If he wants to get in and challenge her, then he needs to do that, and that's his right."

Former Los Angeles Mayor Antonio Villaraigosa, who was present at the debate as a stand-in should Mrs. Clinton need one, agreed with Podesta, but added that out of all the candidates, Clinton was certainly the most eloquent. She was also, he said, the one Democrat who actually struck fear in the Republican Party.

Some took a firmer stance against a potential Biden entry at this juncture. Jamelle Bouie, Slate's chief political correspondent, wrote that if there's anything to be learned from last night's debate, it's that Clinton is the front-runner for a reason, and there's no room for Biden. This is because, Bouie explains, Biden is a hedge for the Democratic Party should Clinton need to drop out. But it doesn't look like that will happen.

"If Joe Biden were looking to the (debate) for a reason to jump it, he'll have to search elsewhere," tweeted Larry Sabato, a political scientist at the University of Virginia.

Get Your Boogie Boards Out! According to a report compiled by Goldman Sachs analysts and released on Oct. 12, the 2008 financial crisis is still crawling along - and, in fact, we've just entered its "third wave" Here's what that means and how it's going to affect your bank account...

Who Cares? sure not Me.