What is transpiring in geopolitics prompts me to recall the depths of the Cold War. Back then, the two superpowers - the United States and Russia - contested for leverage wherever they could. But the primary battlefield was Africa.

That may not seem obvious until you consider the following: Much of the conflict (especially the part I was involved in) dealt with limiting the other side's ability to operate. And most of that ended up in what was called "D&D" - denial and deception.

Overall ("big picture") objectives had two major avenues in these "adventures." One involved using puppet governments and insurgencies to fight "hot" wars instead of deploying American and Soviet ground forces to face off against each other.

The other encompassed identifying weak links in command and policy structures, exploiting them, and advancing objectives at the expense of the other side.

Both strategies ended up being played out in Africa, resulting in a good deal of the misery that followed. Major powers rarely structure policy with a primary interest in limiting collateral damage.

We targeted Soviet embassies in Sub-Saharan Africa because they had the weakest security (and often the least capable personnel). In turn, Moscow targeted the U.S.'s overcommitment to some very suspect domestic leadership

In both cases, it was the locals who paid the price in hardship and death. It was a chess game with live pieces.

A Rising Power Vacuum in the Crude Heartland 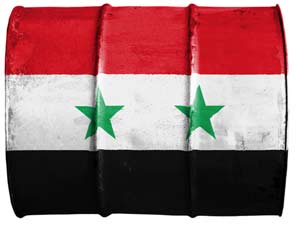 Today, what's happening in Syria is paralleling that history. In the process, the new Cold War is starting to look very much like the last one. In point of fact, I don't believe the "old" one ever ended.

Back then, Washington would prop up suspect dictators (in the name of stability) while Moscow would champion liberation movements (in the name of an international class revolution). But today there's a twist: Russia supports the Assad government in Damascus while the United States aids those attempting to displace a dictator.

A reversal of roles but the same ongoing drama.

What happens in the Middle East has always had a rather direct impact on energy prices and the prospects for investing in the sector. But the geopolitics surrounding the region often marches to a different drummer.

However, one major difference separates the Africa of 1960-1985 from present-day Syria. Africa had very little to do with energy in general and oil in particular. Syria, on the other hand, is a rising power vacuum right smack in the middle of the largest concentration of global crude production.

Thus far, this simple fact has been discounted by pundits and analysts. Rather, the prevalent theme has been to regard the largess of U.S. shale and tight oil as an offset for whatever happens abroad.

Why the Talking Heads Keep Getting It Wrong